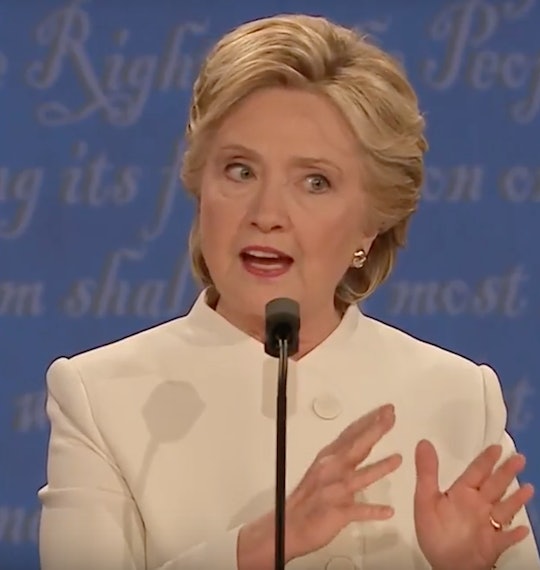 The lead-up to the third debate of the 2016 presidential campaign was intense, the speculation about what would happen relentless. How would Donald Trump handle the recent allegations of sexual assault and harassment against him? Would the WikiLeaks situation finally damage Hillary Clinton? In many cases, the American electorate was out for blood. And then the potential first woman president of the United States took the stage, and, despite the serious issues at hand, it was hard to deny that she looked fierce. Reactions to Hillary Clinton's white suit was proof of one thing to her supporters: She's definitely a boss.

Of course, there are many reasons why Clinton is a total badass. At the first debate, she performed a shoulder shimmy for the books. She responded with poise when her opponent straight-up threatened to jail her if he won the race at the second. During the third debate, she was unequivocal in her mission to protect women's reproductive justice and marriage equality. She has extensive experience serving the American people, from her time in the Senate to her tenure as first lady working in President Obama's Cabinet as Secretary of State.

And, on top of all that, she certainly has style. Case in point: the white pantsuit. And Twitter users far and wide were very impressed:

Clinton is, of course, the unofficial godmother of the pantsuit, because she's been rocking them flawlessly on the campaign trail and beyond. Her pantsuit journey has literally spanned the rainbow and proved iconic in the process, but white was a particularly poignant choice for the this debate, when the country is this close to electing it's first female president: The Congressional Union For Woman Suffrage gave a significant shoutout to the color white when in its mission statement, written in December 1913 in explaining the reasoning for including purple, white, and gold textiles in its flag. "Purple is the color of loyalty, constancy to purpose, unswerving steadfastness to a cause. White, the emblem of purity, symbolizes the quality of our purpose; and gold, the color of light and life, is as the torch that guides our purpose, pure and unswerving," the founders wrote.

It's true that Clinton's clothing and appearance are not what the American people should focus on. She's a woman with ideas about how to move this country in a direction she believes will improve the lives of everyone who calls this great country home, and we should recognize that that is the defining attribute she brings to the table (or the Oval Office). But as we slough toward the finish line after a hard-fought fight for the presidency, it's can't hurt her to get a little love for her impeccable fashion choices, too.