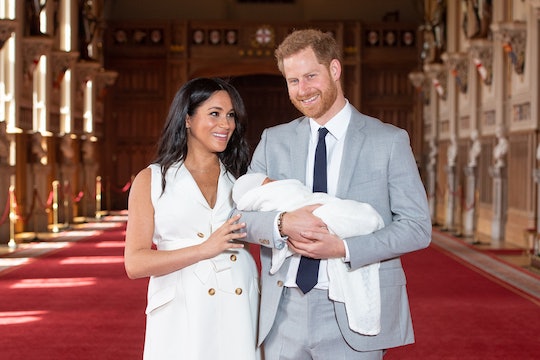 Sometimes the internet surprises you and it's sort of a lovely thing. For instance, I don't know if you guys have noticed but every once in a while the people who use said internet can be a little tough on women. I'm going to go ahead and say this; tough on mothers in particular. Especially famous mothers since they tend to be just that much more visible and therefore prey to mom shamers of all kinds. I am happy to report that today does not appear to be one of those days. In fact, the majority of reactions to Meghan Markle's first photos after giving birth to baby Sussex have been altogether kind and supportive, so I guess the sun is shining the world over isn't it?

The Duchess of Sussex gave birth to a healthy 7 lbs., 3 oz. baby boy on Monday, May 6 with the Duke of Sussex at her side. The couple had been adamant that they wanted a few days alone with their little one, whose name has not yet been released, after his birth. In fact, they even went so far as to release a statement letting the public know that they would be forgoing the traditional photo call mere hours after their baby's birth, according to Vox, and would instead wait until they felt ready.

Which is, perhaps, why the couple and their little boy look nothing short of calm and radiant in their official photos at Windsor Castle on Wednesday.

The happy couple, who are just weeks away from celebrating their first wedding anniversary, stepped out for a short interview with reporters on Wednesday morning and neither of the new parents could help a little gushing about their baby boy. Markle told reporters, as CNN reported, that her son has the "sweetest temperament," She said, "It's magic, it's pretty amazing. I mean I have the two best guys in the world. So I'm really happy."

Her happiness appears to be the theme of the day, actually. Royal watchers took to social media to congratulate the couple and comment on how happy and radiant the new mom looked. One person commented, "She’s glowing! She looks amazing!"

Another said, "So lovely to see such happy new parents, Meghan looks radiant. All the best wishes for you all."

Another wrote, "Healthy mom, healthy baby, giddy dad. So happy for them."

A few royal watchers couldn't keep from commenting on Markle's composure so soon after giving birth... not to mention her lovely dress designed by Grace Wales Bonner, according to TIME. One such person commented, "I love that she didn’t come out to show her baby before she was ready to. Most women are just getting out of the hospital at that point. It’s great that daddy is the one holding the baby and her dress is a maternity dress, reality."

"Any woman who wears white 2 days after blasting a human out of their vajeen deserves a medal. Also, she looks amazing," another said.

Now before you start to think the arrival of Baby Sussex might have ushered in a real love fest where people stopped comparing women to each other, think again. Meghan Markle's appearance with her baby boy and her husband was compared with her sister-in-law Kate Middleton's appearances after giving birth to her three children, as Cosmopolitan noted. But at the end of the day, most fans were just happy to see the new family looking so well together.

Prince Harry and Meghan Markle were kind enough to share a little snapshot of their new life as parents with fans, and for once it seems like people are coming together to just congratulate them. After a year of difficult press, it's honestly quite lovely to see.