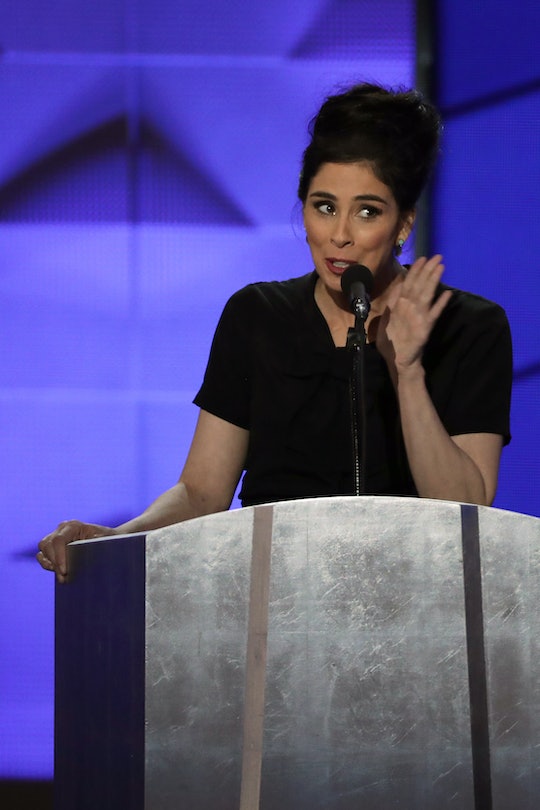 Comedian Sarah Silverman took the stage to address the crowd at the opening night of the DNC Monday night, and unfortunately, not all went as planned. After being asked to stretch her speech to fill a gap in between speeches, Silverman went off the cuff. In her earlier remarks, Silverman, who had initially supported Sen. Bernie Sanders throughout the primary race, said she would "proudly" vote for Secretary of State Hillary Clinton in November — but in her unplanned remarks, she became visibly frustrated with her fellow Sanders supporters and called them "ridiculous" for chanting "Bernie" and "Lock her up" repeatedly. Immediately, social media reactions to Silverman's DNC remarks showed just how divided the room had become.

"...Can I just say... to the 'Bernie or Bust' people, you're being ridiculous," Silverman said.

Her remarks were met with a strong reaction from the DNC audience – a mix of applaud, and disapproval. And reactions to Silverman's remarks on social media shows a similar divide.

"It's really great that Sarah Silverman is in a position to be condescending & insulting to millions of people who are desperate for a change," one Facebook commenter wrote. "It's great that after yet ANOTHER round of proof that the system is corrupt & rigged to silence them, Sarah feels they should just shut up and support that very same system."

The opening night of the DNC kicked off with an exceptional contentious tone since Wikileaks released nearly 20,000 e-mails on Friday that reinforced to Sanders' supporters what they long suspected – Democratic National Committee officials were biased towards Clinton receiving the party's nomination. Large groups of protesters gathered in Philadelphia on Sunday, and again on Monday, to show their support for Sen. Sanders, and to protest the DNC and to condemn the information revealed in the leaked e-mails.

DNC speakers discussed efforts to unify the Democratic party Monday night, but on Twitter, some argued that Silverman's remarks could have just the opposite effect.

Other Twitter users expressed that they appreciated Silverman's tone, with one person tweeting that they would like to see more of Silverman's direct tone and language.

"All I want now is for Sarah Silverman to have a show where once a week she tells some group they're being ridiculous," the Twitter user wrote.

Whether you agree with Silverman's remarks or not, her "ridiculous," comment will likely join a long list of talking points and debates for days to come.