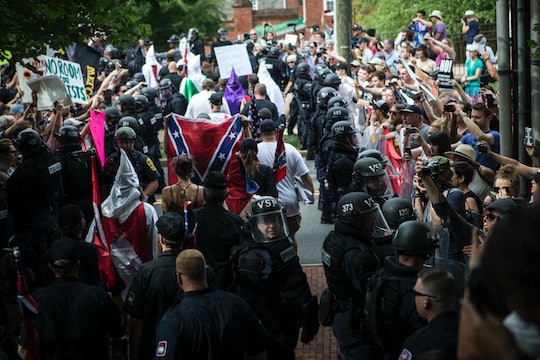 Reactions To The Alt-Right Rally In…

Several alt-right groups of white nationalists and white supremacists gathered on Saturday in Charlottesville, Virginia. They were supposedly gathering to protest the removal of a Confederate statue, as well as the renaming of two parks initially named after Confederate generals. But they really gathered to promote hate, and fear, and division. Unfortunately for the sadly misinformed protesters, these reactions to the alt-right rally in Charlottesville prove that hate won't win. Even if it often feels as though it will.

Alt-right demonstrators have been harassing the people of Charlottesville for the last few days, starting with a gathering of hundreds of white nationalists on the University of Virginia campus on Friday night. Armed with torches and chanting "blood and soil," these protesters lasted around 15 to 20 minutes before police declared they were "unlawfully assembled" and they were dispersed. On Saturday morning, Virginia Gov. Terry McAuliffle declared a state of emergency for the city of Charlottesville, in preparation for the ensuing rally organized by alt-right blogger Jason Kessler. A federal judge ordered that the "Unite the Right" rally set for Saturday at noon in Emancipation Park (formerly Lee Park) was lawful, but violence erupted hours before it even began. Fights broke out, urine was thrown, arrests were made. The rally dispersed. And the spirit of inclusion won out.

As evidenced by this peaceful protest by 20 members of the Charlottesville clergy, including Harvard professor Cornel West, who linked arms to signify unity.

Political leaders in the state of Virginia were quick to denounce the rally, with Republican Edward Gillespie (who hopes to run for governor of the state) noting:

Having a right to spew vile hate does not make it right.

Politicians beyond the borders of Virginia took to social media to spread a message as well; hate is simply not welcome here.

Even First Lady Melania Trump spoke out before her husband, President Donald Trump. And her message was genuinely lovely.

While Trump's eventual response, hours after the fact, was decidedly careful.

Celebrities reacted with messages of support for peace and unity in Charlottesville as well, with some pointing the finger of blame for the hateful rhetoric at the Commander-in-Chief.

Yet it was the image of this black police officer, standing guard while white supremacists waved the Confederate flag behind him, that struck many as especially poignant.

The choice is ours.