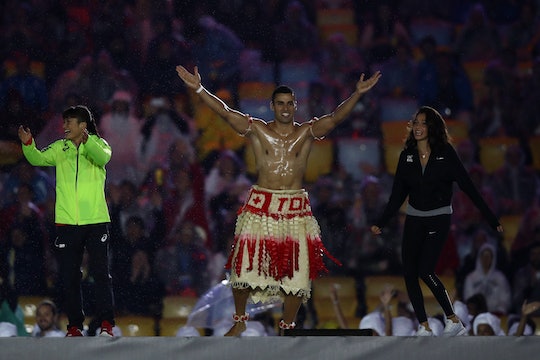 One of the breakout stars from the Rio Olympics was clearly Pita Taufatofua, who carried the flag for the country of Tonga during the opening ceremony on August 5. Thankfully, he returned to the stage once more before The Games ended, and the the reactions to Tonga Man during the closing ceremony prove just how much he'll be missed come Monday morning.

The world knows Taufatofua as one of the highlights of the opening ceremony, but they might not have caught his event. (Oh yeah, he's also an amazing athlete in addition to a handsome flag-bearer.) According to the New York Daily News, Taufatofua competed in the men’s taekwondo heavyweight division Although he had fans cheering cheering "Tonga, it wasn't enough for hi to take down his opponent, Iran's Sajjad Mardani, who beat him 16 to 1. Despite the fact that he did not advance, The Wall Street Journal noted that Taufatofua did not mind the outcome. "Even though he lost, he was happy," Mardani said through a translator.

The same articles noted that Taufatofua was also happy that his appearance in the opening ceremony could bring a bit of fame to his country. "Every interview I’ve gone to they say, 'You know, you’re the man that broke the internet'," he said. "I say, 'No no. Tonga broke the internet." The athlete – who is also a model, of course – hinted that he would appear in the closing ceremonies Sunday night. He said, "Keep your eyes open...don’t blink or you’ll miss it."

But the world definitely did not miss it. Taufatofua appeared on stage dancing, oiled-up as we so happily remembered him:

Social media took notice as well. Twitter was immediately abuzz once he took the stage:

Thanks to the beauty of the internet, fans don't have to just react to the Tonga Man – they can keep up with him after the ceremony is over. He has both Instagram and Facebook accounts, and seems to be pretty active on social media. On a Facebook post he wrote the night of the closing ceremony, he said that Rio would not be the last we see of him. "It took me 20 years to get here, if it takes another 20 we will bring that Gold home," he said. "We aren't finished yet." Looks like the Tonga Man is dedicated to his sport for the long haul – and we couldn't be happier about it.