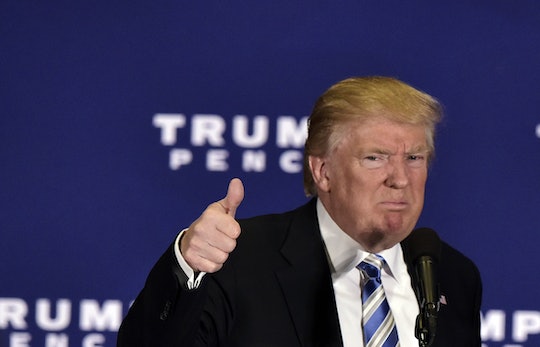 On Friday morning, the moment America has been waiting for (or dreading), finally came to pass. Reality star, real estate mogul, and one-time seller of specialty steaks Donald Trump became the 45th President of the United States. Of course, the reactions to Trump’s inauguration on social media were varied — there were jokes, there were hashtags, and there were some cries for help. But that was to be expected. After a contentious election and seemingly never-ending transition period throughout the holidays, the whole ceremony was almost surreal.

Both Trump detractors and supporters could barely believe that Trump, and his vice president, Mike Pence, were finally swearing on a Bible and reciting the oath of office. No matter what your opinion of Trump and his entire team, on Friday morning the Trump administration officially became, as they say on the internet: a thing. Unbelievable, right?

All of the reactions were to be expected. Heading into the week, Trump's approval ratings were plummeting, despite his insistence that Americans were ready to say goodbye to the Obama Administration. In addition to that, an ABC poll found that 35 percent of Americans — and 60 percent of Hillary Clinton supporters — were experiencing increased stress and anxiety about the inauguration.

There's one great thing about social media: when big things happen, like a Bachelor contestant breaks out the whip cream or a divisive businessman becomes the leader of the free world, everyone's a comedian. Or just really open about how they're really feeling.

Here's a sampling of how some people were taking the inauguration on Friday morning:

And that was just those who were watching the ceremony. Others who boycotted the TV on Friday morning were also happy to humbly brag that they were totally zen when it came to the swearing in. But if you're tweeting about not watching, that means you still sort of care, right? And how do you avoid the hashtags?

As you can see, it was a rollercoaster of emotions throughout the morning. Whether it was the performances, the opening remarks to introduce the new leaders, or merely rants and raves about Melania and Ivanka's dresses and jackets, everyone was feeling pretty much all the feels about the inauguration. And what better place to air those feels, just like America's newest president does all the time, than on Twitter?