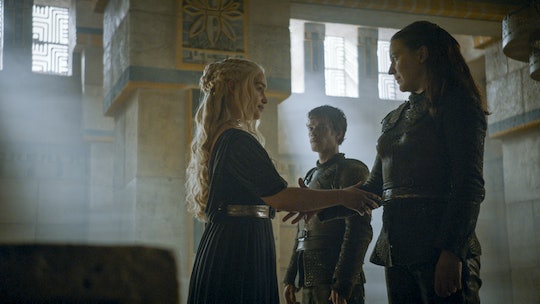 'GoT' Fans Are Eager To See This Steamy Season 7 Scene

Game of Thrones premiered with great fanfare in an exciting episode that seemed to perfectly kick off Season 7. But its 30-second promo for Episode 2 contained some intriguing shots as well. The official description for "Stormborn," reads, "Daenerys receives an unexpected visitor. Jon faces a revolt. Tyrion plans the conquest of Westeros." It's poised to be a Dany-centric episode, given the title, and we may have seen her "unexpected visitor" in the trailer, which prominently features Daenerys' ally Yara Greyjoy and Ellaria Sand kissing on Game of Thrones. Needless to say, reactions to this steamy scene have been enthusiastic, to say the least.

Ellaria is the widow of Dornish Prince Oberyn Martell, whose skull was memorably smushed by The Mountain in Cersei and Tyrion's trial by combat. After his death, Ellaria demanded the new Prince of Dorne, Oberyn's brother Doran, declare war against House Lannister. When he refused, Ellaria and her Sand Snakes (ie., daughters) murdered him, his heir Trystane, and Trystane's betrothed, Myrcella Baratheon. She joined up with Olenna Tyrell at Highgarden — who is also seeking revenge against Cersei after the wildfire massacre at the Sept of Baylor — and pledged fealty to House Targaryen.

That means Daenerys Targaryen, Olenna Tyrell, Ellaria Sand, and Yara Greyjoy have all teamed up against Cersei Lannister. Somehow, although not unsurprisingly, Ellaria and Yara end up tangled in a kiss in the next episode, which is generating mostly positive buzz amongst fans on Twitter.

Yara was revealed to be a queer character last season, when viewers saw her partaking in ye grande olde tradition of picking up a bar wench before taking her fleet out to sea. Prior to that, fans had only ever seen Yara sexually engage with her brother, Theon, although her seduction of him when he didn't recognize her has widely been interpreted as nothing more than a power play. Her powerful (and potentially erotically charged) scene with Daenerys had fans shipping them as the series' next big it-couple, but Ellaria might upend that notion.

In contrast to Yara, Ellaria was set up as queer right off the bat. Dorne is definitely the most sex-positive kingdom in the realm, with polyamory and sexual fluidity enjoying a remarkably de-stigmatized status amongst its people. Ellaria and Oberyn had an open, adventurous partnership which frequently involved other paramours of various genders. The question is, does either Yara or Ellaria only seduce the other because she wants something? Or is a genuine love connection about to happen? Given the fact that the women of Game of Thrones tend to avoid claiming a misguided sense of ownership over their partners, I wouldn't necessarily discount Yara/Daenerys happening just because Yara and Ellaria get together.