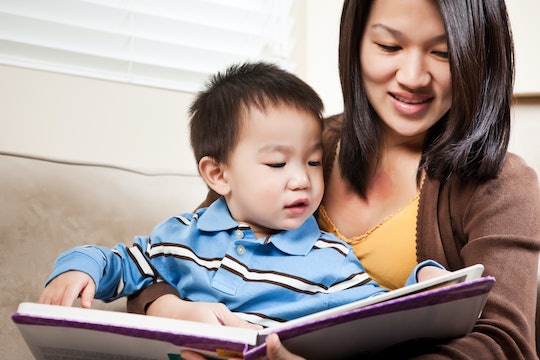 Reading 5 Books A Day To Your Kid Can Give Them A Huge Advantage, New Study Says

I think most parents are well aware of the importance of reading to your kids at home. We all know they benefit from the time spent with their parents, the language, the stories. But still, life gets in the way sometimes and it's difficult to sort of sit yourself down and read to your kids when there are so many other things that need to get done in a day. It seems like such a little thing to miss out on, but according to new research, it's not. Apparently, a recent study found reading five books a day to your child before they start kindergarten gives them a huge advantage for their education, and it's that sort of reminder so many of us need to just curl up in a chair and read with our kids.

After conducting this initial research, she and her team decided to look into the issue further. As she told the Ohio State News, "The fact that we had so many parents who said they never or seldom read to their kids was pretty shocking to us. We wanted to figure out what that might mean for their kids."

According to Ohio State News, the team worked with the assumption that children under the age of 3 would read board books at about 140 words per book, and picture books until age 5, which generally have 228 words.

All together, the researchers found that reading five books per day to children before they start kindergarten would mean they had learned 1.4 million more words than children who were never read to; they called this the "million word gap," according to Science Daily.

Even if you only read your child one book per day, they will have absorbed 290,000 new words before kindergarten, according to the study shared in the Journal of Developmental and Behavioral Pediatrics. And, perhaps most importantly, those words will be different and more complex than those used in regular conversation.

"This isn't about everyday communication," Logan said of the study's findings, according to EurekaAlert. "The words kids hear in books are going to be much more complex, difficult words than they hear just talking to their parents and others in the home."

There's also all of the "extra-textual" talk that comes after reading a book with your child, where the two of you discuss what was read and you answer questions. All of this is incredibly important for a child's development and not just their vocabulary. As the New York Times noted in a 2018 study, reading aloud to your child also helps them learn to focus and pay attention to language. It might even help with behavior, so that's a plus.

At the end of the day, there really is no down side to reading to your child. It benefits them in so many ways and honestly, it benefits you as well. Because who doesn't love curling up with their child at the end of the day and diving into a book? It's just an all around good time... and your kid might get a million new words along the way.