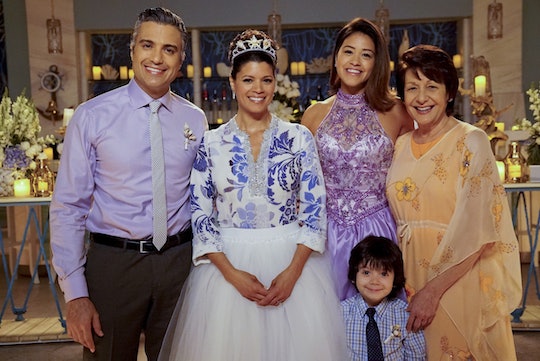 So Much Happened During 'Jane The Virgin' Season 3

Doesn't it seem like just a couple weeks ago, Mateo was artificially inseminated and Jane had to explain to Michael that she was, in fact, still a virgin, but she was somehow carrying another man's baby? I know, I get nostalgic too, but Jane the Virgin manages to pack years worth of storylines into one season — and that was more true in Season 3 than ever before. The show flash forwarded years, so you know there was a lot of ground to cover. So just in case you need a refresher, here's a recap of Jane the Virgin Season 3, because longtime viewers know Season 4's going to be an equally wild ride.

Season 3 kicked off with Michael in critical condition after getting shot in the Season 2 finale (a truly cruel cliffhanger on the producers' part). Unfortunately, while Michael initially survived the shooting and went on to discover he wants to be a lawyer, Season 3 would prove to be his last (except viewers can always expect flashbacks in the Jane the Virgin universe). The lives of the characters dramatically shifted from the beginning of the season to the end. I'm excited to see what's next for everyone, but first I'll break down important plot points from last season:

No!!! This is definitively The Worst twist I've ever seen in television history (OK, that's a stretch, but it did upset me). As I said, Michael initially survived the gunshot, but he died from complications after taking the LSAT. Ugh. He and Jane had their whole lives to look forward to together. He was going to be a lawyer! Alas. Michael passed away during a "regular" episode of the show (meaning, not a finale, in which the show is famous for its shocking twists), and it wasn't a fake-out. It was actually part of the producers' plan for Michael according to showrunner Jennie Snyder Urman, and on the writers' minds since the first season.

After Michael's death, Jane the Virgin jumped ahead three years — and stayed there. This is almost unheard of, and it actually served the show well (at least, in my opinion). Jane was still devastated about Michael's death (as I'm sure I'll be in three years), and she was coping with new challenges now that Mateo is in school. With the flash forward, Rafael was out of jail, Rogelio was starring in a reality show, and Jane snagged a book deal... which is just how I would expect Jane the Virgin to be three years ahead of schedule. The jump remained true to the show while revitalizing it a bit.

Jane Had A Fling With Fabian

Who else is better to get back in the dating world with than a soap opera star? Jane develops a crush with her father's younger co-star, Fabian, and they have a fling. When he introduced her to his grandmother, though, Jane started to think they were moving a bit fast. In the penultimate episode of the season, Jane broke up with Fabian... and he didn't take it too well. He called her a "heartless slut," but she ended up punching him in the nose, so it's all good.

Sometimes love does conquer all! At long last, Rogelio and Xo stopped fooling around with other people and got engaged partway through Season 3. In the finale, they devoted their lives to each other and tied the knot. If viewers can't see Jane's happy ending yet, at least they're given her parents' happy ending.

This storyline tires me out. At the start of the Season 3 finale, Rafael and Petra were together (again), but when Petra questions Rafael and Jane's feelings for each other, they end up breaking up. Judging from a trailer for Season 4, this storyline will continue. Jane insists she doesn't have anymore feelings for Rafael, but her actions may be giving the opposite signals.

What's Teen Wolf doing on Jane the Virgin? I'm kidding, I love the fact that Tyler Posey showed up in the final scene. Throughout the finale, Jane was looking for a letter Michael wrote to her — and it was her first love, Adam, who found it. Was Michael trying to lead her to her next love interest from beyond the grave? I don't know, but I do know that Tyler Posey is a recurring star in Season 4, so the audience will see where Adam and Jane's relationship goes. I'm excited to see what will unfold this season, both with Adam and with everyone else in the Jane ensemble.