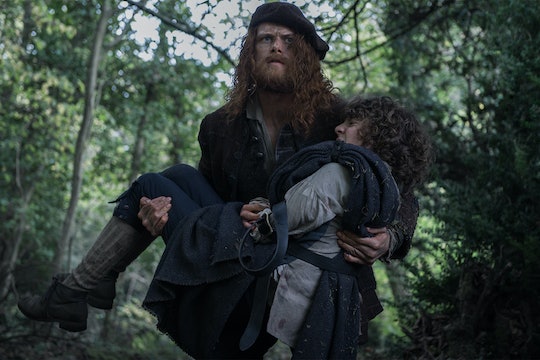 Everything You Need To Remember About 'Outlander' Season 2

Is everyone ready for Outlander Season 3? Because I am beyond excited to go back to 18th century Scotland and see my favorite two lovebirds be reunited after 20 long years. It has been ages since Season 2 wrapped up, so you may need a quick refresher on what's happened so far. So here is a recap of Outlander Season 2 so that you'll be ready when the show (finally) resumes this epic adventure.

If you've read the books, then you know what's about to happen when Claire and Jamie finally find each other again after having lived entirely separate lives in different eras and different countries for so long. Sadly, because the show's creators want the reunion to feel earned, we the viewers are going to have to wait a few episodes before they finally get together again.

But wait, you might be wondering, why were they separated? Why did Claire have to leave again and how did she get back to the 20th century? Wasn't Jamie supposed to die in some big battle or something? Well yes. And as your resident Outlander scholar, I am here to give you a quick recap on everything that happened in Season 2 so that you won't be lost when things pick up again on Sept. 10.

Jamie and Claire spent most of the second season in France, where they met up with the pretender, Prince Charles Stuart. This is the guy all the Jacobite rebels (i.e. Mackenzies) want to see rule Great Britain — and Scotland — instead of the King that's currently on the throne. Jamie and Claire were basically trying to get "Bonnie Prince Charlie" to give up the rebellion, avoid the massacre of the Scottish people, and essentially save the Scottish way of life. It did not go super well. But Claire served some epic looks, earned a reputation as a witch, and Jamie almost died in a duel. You know, normal French things.

Claire was pregnant for basically all of the second season. Her first child, a daughter she named Faith, was tragically a stillborn. Watching the inimitable Caitriona Balfe cradle her lifeless baby has to be one of the saddest scenes I've ever watched on TV. Seriously, this show does not mess around with my feelings. But she gets pregnant again with another baby, and she and Jamie are determined to make sure this one survives.

The Battle Of Culloden

So Jamie and Claire's plan to squash the rebellion from the inside failed. So Jamie, being Jamie, decided they must go back to Scotland to fight for the Jacobites on Culloden moor. This battle is famous in Scottish history as being one of the bloodiest and quickest battles ever. The Scottish forces were obliterated, and Jamie had every intention of dying on the battlefield. Which brings us to the next point...

Claire Went Back To The Stones

In order to save their baby, and because Jamie believed he was doomed to die at Culloden, Claire returned to the stones at Craigh Na Dun and went back to the 1940s, where it would be safer for both her and the baby.

Well, technically Claire and Jamie's daughter Brianna, with help from Roger Wakefield, found out that Jamie didn't die on Culloden moor. It's now 20 years later and Brianna is all grown up. The two of them have returned to Scotland from Boston, and after a very uncomfortable conversation, Claire told Brianna the truth about her father. So Brianna went on the hunt and found evidence that Jamie survived Culloden. So naturally, Claire is eager to go back to him.

And that brings us to Season 3. This is going to be so, so, good you guys.