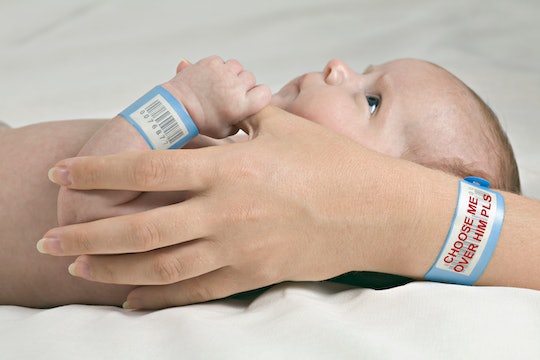 This Reddit Mom Ruined A Christmas Party, But She Was Right

In a now-viral post, Reddit user u/Aithana, who describes herself as "a person that likes to be prepared for the worse case scenario and hope for the best," explained that, prior to her first birth, she asked her husband to promise that if he ever had to choose between her unborn child's life and her own, he would choose hers. The question at hand is: does that make her an a**hole?

The Reddit user is a mother to a healthy 2-year-old and openly planning a second pregnancy, which she recently discussed at a Christmas party. When her friends asked if she was ready to be pregnant again, she admitted that she was scared of giving birth and the possibility of not only dying, but leaving her daughter without a mother. She then explained the original agreement. At this, her friends were appalled; "disgusted." "[They] said that I was an a**hole to my husband in asking him to basically kill his baby (those where the exact words)," @Aithana explained in Reddit's AITA ("Am I The A**hole?") forum. So she brought the situation to AITA's attention to see if her completely hypothetical medical-slash-existential decision was off-base.

In this year of our Lord 2020, Reddit's AITA ("Am I The A**hole") forum provides my salty heart a rare, mutually consensual outlet to act as my own Judge Judy, and I have to admire this lady's courage in putting her life-and-death decision out for a thumbs up/thumbs down from strangers cloaked in William Gibson handles. Generally, AITA is magnificent... until you run across a mom with a history of gestational diabetes asking if choosing her own life over her future child's in a hypothetical delivery-room emergency makes her an a**hole. (On a scan of the 3,000-some comments, basically everyone agreed that she was "NTA.")

Here's the extent to which I'll give the OP a little bit of side-eye: this is unnecessarily heavy subject matter for a Christmas party. Like, read the room. I came here for egg nog and a cookie swap. Discussing life or death medical scenarios was not anywhere on my radar when I put on my ugly sweater this evening. But OK! It's out there now, so let's get into it. Why did this hit such a nerve? Why were her friends' so upset with her decision? The OP's conversation may have been a record scratch at her Christmas party (again, time and place) but it's opened up a discussion for the rest of us, which is good.

The idea that we have to give away every bit of ourselves, piecemeal, until we're no more than a footnote in the story of our own lives? No thank you.

Too often, motherhood is poetically linked to the idea of sacrifice. (Or less poetically via the million and seven "I'm a mom and I have no life of my own!" memes posted by that one woman you met at a Pampered Chef party once. The ones that are meant to be funny but after the 10th "zinger" you're like, "Are you OK?") We sacrifice our bodies to pregnancy and breastfeeding. We sacrifice our sleep and our careers and our social lives and our money and our dreams to raising our kids. And we do all this willingly and joyfully, for the profound love we have for our children and also altruistically, because it's how humans are programmed for survival.

Yes, giving birth to and nurturing another person requires work and probably more than a few sacrifices (conspicuous spending, I miss you so, so much), but the idea that we have to give away every bit of ourselves, piecemeal, until we're no more than a footnote in the story of our own lives? No thank you.

But the "mother as martyr" idea is ancient and engrained in the cultural imagination. So the idea that a woman could proactively eschew the "I'd give my life for my baby" narrative strikes some people's brain stem operations centers as shocking and deplorable, while for others it's an opportunity to cry out "THANK HELL SOMEONE FINALLY SAID IT." Even if the belief that women have value outside of their reproductive function is widely accepted, it's still, somehow, up for debate... and people are pretty pissed about that.

It's also possible that we don't want to admit that the delivery suite is a place where things do go wrong. Much as your great aunt making you pick out the china pieces you want to keep "after I'm gone" when you've gone over simply to mow the lawn is a bit morbid, answering an innocent "Do you think you're ready for another?" with "Yes, unless I suffer certain death! And then I'd rather not" is, again, not something that pairs terribly well with peanut butter kiss cookies.

Thus, my judgement as Internet Lady is that we would do well to acknowledge more plainly the sacrifices mothers make, and the risks they take on while carrying, delivering, and tending to little humans. But... maybe keep things a little more feliz navidad at the next yuletide bash. We could all stand to be less of an a**hole in 2020.