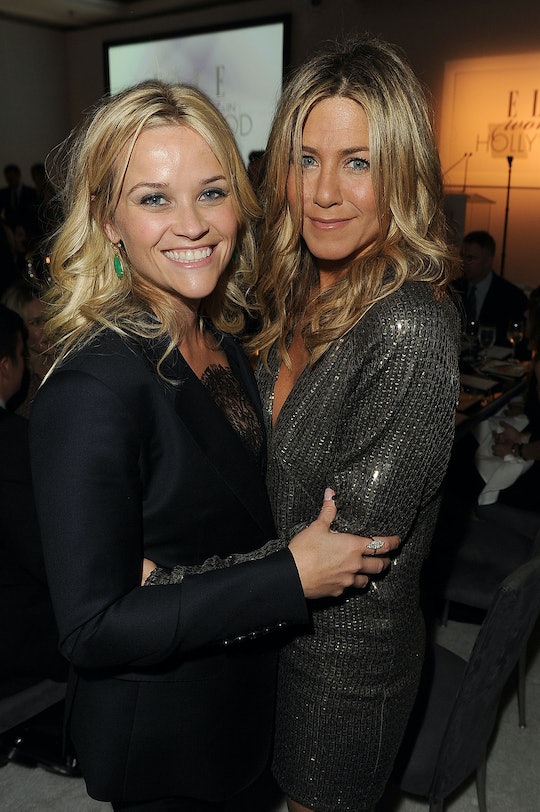 I thought I followed things but who knew these two stars were this close? They have similar golden hairstyles, they're both funny, and they've even previously worked together, so maybe I should have seen it before. And now they're going to work together once again. Reese Witherspoon & Jen Aniston's new show for Apple will take on gender politics and morning news shows... color me intrigued.

As entertainment website One Country detailed, Witherspoon and Aniston seem completely psyched to launch this creative-sounding project, which will be a dramatized look at the intense world of broadcast morning news shows, with an emphasis on how gender relations on the air mirror the gender politics of today's workplace.

Totally fascinating, right? Plus, Steve Carell will be Aniston and Witherspoon's characters' third wheel to counterbalance the female perspective, One Country added.

"We take an honest look at the complex relationships between women and men in the workplace, and we engage in the conversation people are a little too afraid to have unless they’re behind closed doors," the website quoted Aniston as saying at an Apple event to launch the project, before adding that "you can’t have an honest look at complex relationships between men and women with just women."

Witherspoon sounded just as excited as her co-star when chatting about the project, per O magazine.

"We pull back the curtain on the power dynamics between men and women in the high stakes world of morning news shows, " she noted at a launch event at Apple headquarters in Cupertino, California, as outlined by O magazine, which noted the show will air on the company's new streaming service, Apple TV+.

And while the show at first glance sounded like a talk-based reality project, O noted it's a drama from the teeny sneak peek given so far, a fictional version of what might go down behind the scences at Good Morning America. Brian Stelter's book Top of the Morning: Inside the Cutthroat World of Morning TV will be used as a reference point to keep the show's action rooted in reality, The Hollywood Reporter noted.

And with morning shows having suffered scandals in recent years regarding host-to-host behavior, O noted that Carell confirmed he will play a "dominant male" character.

The timing of this thing really hits the nail on the head, with new stuff emerging seemingly every day regarding the gender wage gap and workplace harassment.

And it's not just a female-driven story on the screen, either, with The Hollywood Reporter noting the project also features both Witherspoon and Aniston as executive producers. It was reportedly snapped up by Apple after a bidding war. Nice.

One thing I like about this piece of news is the fact that so many of Hollywood's most powerful females are not only buddies with these two, but are actively rooting for this and other projects like it, from Courteney Cox to Gwyneth Paltrow to Halle Berry to Olivia Wilde to Maria Shriver and Amber Tamblyn, all of whom left comments on Witherspoon's social media post.

As E! Online noted, many people will recall that Witherspoon and Aniston co-starred on Friends briefly, but not everyone may realize the depth of their bond. The two stars got even closer over the years, the news site noted, and worked together with a group of Hollywood heavyweights to form Time's Up, a nonprofit to fight harassment and inequality in the film industry following a massive series of scandals.

And naturally, Witherspoon was one of Aniston's many guests at her recent birthday bash, W magazine confirmed. So between the fab talent and the topic, I literally can't wait for this show to debut sometime this fall.