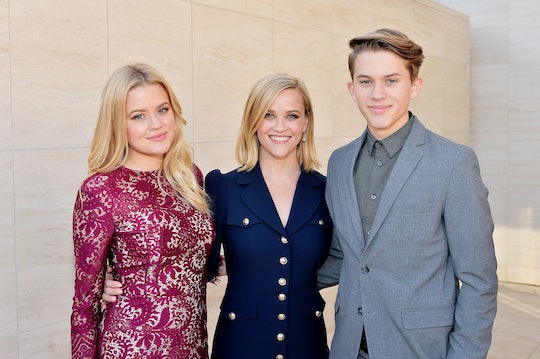 If you ever wanted to take a crash course in how to "dap," Reese Witherspoon's son Deacon Phillippe is here to save us all. Earlier this week, the Big Little Lies star shared a video on Instagram of her 16-year-old teaching her how to "dap somebody up" and he also breaks the news to her that "dabbing," a totally different thing, is officially over.

"You said you were going to 'dap somebody up', and what does that mean to dap somebody up?" Witherspoon asks Deacon, who she shares with her ex husband Ryan Phillippe, in the video. "It's basically like a handshake I do with my friends," he replies. "Will you show me how to dap?" the mom of three asks. And with that, they get going.

After a quick clarification between "dapping" and "dabbing," some very eager use finger guns from Witherspoon, and a confirmation that no noise is needed, Deacon taught his mom the art of "dapping." And at the end of the video, Witherspoon proudly gives a thumbs up to the camera, which Deacon hilariously says "is not needed."

As you might have expected, Witherspoon's friends, followers, and family are loving this video, including the the actress' 20-year-old daughter Ava Phillippe, who wrote: "Hahaha my favorite people."

"I'm not a regular mom, I'm a cool mom," Erin Foster commented, quoting a line from the film, Mean Girls.

"The Reese and Deacon Phillippe show is all I want to see," actress and friend Mindy Kaling commented. TBH, same.

This actually isn't the first time Deacon, who commented on this video with the face palm emoji, has given his mom a lesson in what teens are up to these days. This past September, for instance, he taught her all about TikTok, showing her different dance moves that are popular on the app. So now that she's an expert in TikTok and dapping, I think even Regina George would agree she's no regular mom.