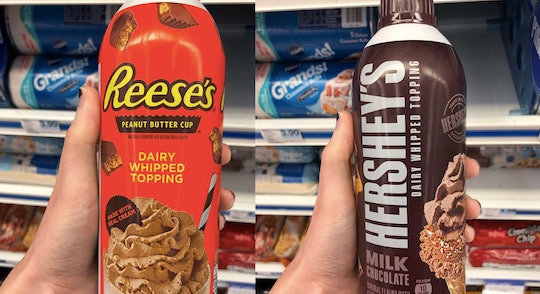 Confession: when I was a kid, if my mom and I made it through a grocery shopping trip on a Saturday after my basketball game without either of us losing our cool, we'd reward ourselves with a sweet treat: a can of chocolate whipped cream. Yes, we totally took turns spraying it into our mouths on the way home and feeling sick the rest of the day. #WorthIt. But to be honest, if there had been Reese's and Hershey's whipped cream back in those '90s days, we totally would've had a full dessert fest in the car. Because you guys — whipped cream infused with the flavor of your favorite candy bars? It's sorcery, is what it is. Delicious sorcery.

There have been rumors that the literally sweet new flavors of Hershey's and Reese's would be in stores by the third week of July, but thanks to some savvy food Instagrammers, we've kind of got confirmation. Apparently these new cans of whipped cream have been spotted in Hy-Vee grocery stores and people are seriously ready to snatch up their own. I called two of my own local grocery stores to get some info, and while one person told me they hadn't heard anything about the product, another told me that the creams would be in "by the end of the week." That could either be the truth or something they told me because they know I'm in my third trimester of my second pregnancy, it's approximately a bazillion degrees, and they just wanted me to stop asking them about whipped cream.

I've yet to find any information on the Hershey's website about these products, however, so this could be a giant trolling project to get everyone fired up about whipped cream. (It's working, y'all.) But since there are several Instagram accounts full of pictures of this stuff, I'm holding out hope that my grocery stores won't let me down. (If they think I won't show up there, demanding a can of Reese's whipped cream, they've got another thing coming.) In fact, the Instagram account junkfoodreviewz assured commenters that while the whipped creams have been primarily seen at Hy-Vee, they should be in Walmart and Winn-Dixie as well, and hitting all major grocery stores.

But without an official company release on the items, it's hard to share too many details. Suffice it to say, the thought of a Reese's and Hershey's flavored whipped cream is really enough to make you want it. Instagram user markie_devo shared at the end of June a grainy image of the cans and wrote, "I heard the snack internet world needed saving, so I have come to the rescue. The wonderful world of whipits is about to be turned upside down!! Hershey’s is releasing a milk chocolate and Reese’s whipped cream the 3rd week of July and will be available at all major retailers."

I'm not sure how markie_devo knows these things, but considering there is more photographic evidence of these dessert upgrades, I'm going to assume he got something right here. It is the third week of July after all.

Romper has reached out to Hershey for more information, but has yet to hear back at the time of publishing. What we can figure out from looking at images Instagram users have published is that these whipped creams are actual dairy whipped toppings made with real cream and will be Hershey's chocolate flavored and chocolate and peanut butter flavored for the Reese's. They come in 7-ounce cans and look to be 10 calories per serving for the Hershey's and 15 calories per serving for the Reese's. (A serving is a whole can, right? Asking for a friend.) The Hershey's whipped cream will be brown and the Reese's will be a tan, peanut butter color — and both will be mega delicious on whatever you're eating. Waffles? Yes. Cookies? Yes. Ice cream? Yes, yes, yes. Seriously, this is definitely going to upgrade your s'mores this summer.

Oh Hershey's. If this is some kind of social media trick, it's really cruel to play on anyone, but especially a pregnant lady who now just wants a giant bowl of whipped cream.