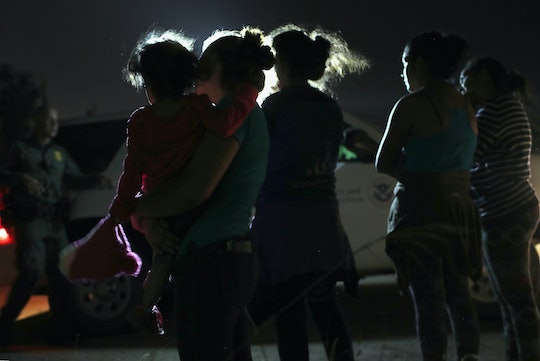 Amid President Donald Trump's crackdown at the border, reports of migrant children getting dragged and pushed by staff at a shelter in Arizona have made headlines recently, prompting an investigation by local authorities, and it is truly heartbreaking. In the face of such brutality, many are speaking out and calling for action.

The Arizona Republic released videos back in September that reportedly showed staff members at Southwest Key's Youngtown Hacienda Del Sol shelter dragging and shoving children in their care. Southwest Key is a nonprofit organization that houses almost a third of detained migrant youth, according to The New York Times, and reports of violence against those children are undeniably shocking. The videos were reportedly obtained from state health authorities and edited to conceal the identities of the children. They are said to involve three children and a number of staff members.

Following the release of the video, the Maricopa County Sheriff's Office determined that there was no grounds for criminal prosecution after reviewing surveillance footage, according to AZ Central. But on Monday, officials at the sheriff's office decided to refer the decision to the Maricopa County Attorney's Office for a review, as AZ Central reported.

The shelter was temporarily shut down and shuttered by the federal government in October, according to HuffPost. Following the suspension of operations at the Hacienda Del Sol, Southwest Key told Romper in a statement:

We wholeheartedly welcomed the Office of Refugee Resettlement’s decision to suspend operations at Hacienda Del Sol and are working to thoroughly retrain our staff. We are simultaneously engaging the Child Welfare Consulting Partnership to do an independent, top-to- bottom review of our processes, procedures, hiring and training in our Arizona shelters.

The reports of children being abused come in the wake of another travesty that reportedly happened on the grounds of a Southwest Key detention center, according to NPR. In August, two of the nonprofit's employees — one of whom was HIV positive — were charged with allegedly sexually assaulting multiple immigrant teens at a center in Mesa, Arizona, according to CBS News. The alleged sex crimes prompted actress Alyssa Milano to pen a passionate Op-Ed published by CNN calling out both the shelter and the Trump administration for letting such atrocities occur. She went on to explain that the actions of Southwest Key employees are rooted in a larger issue with U.S. immigration:

I wish I could say this was a new problem, one that is not deeply rooted in our immigration enforcement agencies. It is not. A report released in May by the American Civil Liberties Union detailed allegations of unspeakable acts of sexual violence, neglect, and physical abuse of immigrant children in the care of Southwest Key and other agencies stretching back nearly a decade.

The release of the videos of young children being physically assaulted in the Youngtown Hacienda Del Sol shelter outraged Milano, lighting her fire for justice yet again. She retweeted her original Op-Ed and included some more recent findings regarding Southwest Key in a Twitter feed.

Since December, many have taken to Twitter to express their outrage as well.

As Milano argued in her feed, migrant children are not "illegal" — they are just children. Regardless of where you stand on immigration policy and reform, I think everyone can agree that violence and sexual assault against anyone — and particularly against minors — should not be representative of the U.S. immigration system. And most importantly, such actions cannot and should not be tolerated.

If these reports enrage you, consider contributing to one of the many organizations that are working to support migrant children and families.