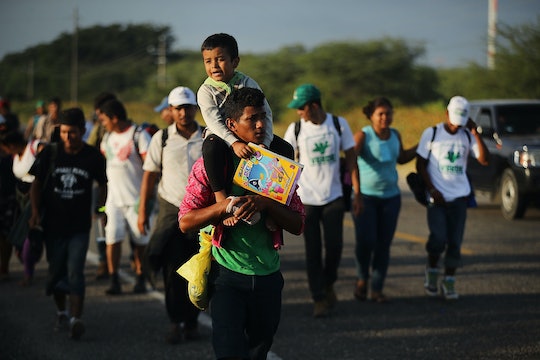 This week, thousands of Central Americans fleeing horrendous conditions back home have reached southern Mexico, according to HuffPost. The women, men, and children who make up the walking caravan are making the long, grueling trek in hopes of seeking asylum in the states, but are facing an immediate threat from the U.S. government. So, if you want to provide support, here's how to help migrant caravan families and children as they continue to fact exhaustion and danger.

UPDATE: On Sunday, Nov. 25, U.S. Border Patrol agents fired tear gas at a group of migrants, including families and young children, CNN reported. According to the Associated Press, "children were screaming and coughing in the mayhem." In the aftermath of these horrific events, here are a few more ways you can help migrant families and children in need.

EARLIER: These Central American families have dealt with scorching heat, a lack of access to clean water, and poor sleeping conditions on their way to the border, and this has left children faint, sick, dehydrated, and battling bronchitis, as HuffPost and The Guardian reported. Immigration experts and advocates have also told the news outlet that many of the caravan members have fallen sick because they have limited access to hygiene, such as showers, and still face the threat of illness even with the supplies brought to them recently by humanitarian groups.

“What we saw is people in despair,” Carlos Mendoza, the content manager at Amnesty International Americas, told HuffPost of his four days spent with the caravan. “They were distressed and in the heat.”

One way to help the migrant caravan families and children is by donating to the nonprofits and humanitarian groups that are offering aid on the frontlines. You can donate to Pueblo Sin Fronteras, the immigrant rights organization that organized the caravan, or the following groups providing support and services:

Save the Children: You can give money to the Border Crisis Children's Relief Fund, which helps Save the Children provide emergency services, as well as legal representation, case management and reunification.

UNICEF: UNICEF is working with the Mexican government and its partners in the country to not only provide safe drinking water, hygiene and sanitation packs, sunscreen, soap, and oral rehydration salts directly to refugees, but also access to psychosocial support and training to authorities on nutrition and child protection. You can donate here.

You most likely have heard the far right's xenophobic rhetoric about the walking caravan, particularly the characterization of migrants as "criminals" and people looking to steal resources "from hard-working Americans." None of that is true, which makes it even more important that you educate yourself — and others — about what is going in Central America and how it affects the United States.

In short: A group of around 4,000 refugees — poor women, children, and men mostly from Honduras — are crossing treacherous terrain throughout Central America to seek asylum in the United States, according to Vox. They are fleeing violence, poverty, starvation, homelessness, and other life-threatening conditions that are, quite frankly, foreign concepts to many of the very people who are spouting xenophobic rants about the caravan.

The migrant families have that have braved the thousands of miles to the border over the last two weeks are risking their lives out of desperation and survival, Vox reported. Yet, President Donald Trump has decided this week to mobilize thousands of troops to "defend" the U.S. border from a walking caravan of people who just want a better life, according to The New York Times.

Not sure which congressperson to call or email? Then visit the U.S. House of Representatives website and enter your zip code to find out. If you're looking for your senator, head to U.S. State Senate website and choose your state. Both websites will pull up your elected official's name and contact information. You can also identify your representatives by going to CallGov.us or Democracy.io, which provides you with a streamlined way to email your lawmakers.

Every American has the political right to contact their representatives to voice concern or support over proposed legislation and policies, and actions of the current administration. And inundating offices with phone calls, texts and emails is an effective way for voters to hold politicians accountable and make sure they're protecting human rights.

As shown time and time again, under the Trump administration, this is needed now more than ever before.