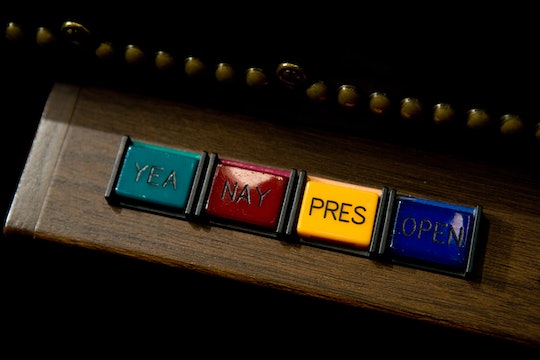 On Tuesday, House Republicans pushed through a bill that would ostensibly overturn Obama-era privacy protection measures for the internet. For anyone not in the loop on tech issues, the gist of this is that Republicans voted to let internet providers sell your information to advertisers. Say goodbye not only to your privacy online, but also your child's privacy as well.

While the Federal Communications Commission was moving towards enforcing rules that banned internet service providers and cable companies from sharing their customer's personal information without express consent, this new bill could allow companies to sell sensitive information (like web browsing history) to the highest bidder. The resolution to effectively eliminate internet privacy rules put in place last October by the FCC was passed 215-205. As of right now, internet service giants like Comcast and Verizon are still required to obtain explicit customer consent before sharing private information. But if President Trump signs this new resolution, that will no longer be necessary as of December 2017.

In layman's terms, internet service providers could then sell sensitive information like information about your children, their health, and indeed whether or not you have children to whomever they like. Without notifying you or gaining your permission. If this new measure is passed, it could also potentially change whether or not internet service providers have to notify customers about harmful security breaches. How precisely are parents supposed to feel that their children have even the smallest modicum of safety or privacy if this is the case?

So that's the bad news. Now here's the worse news: The last man standing in the way between your right to online privacy (and that of your children) and this new world order is none other than President Trump. And the White House has already released a statement on Tuesday saying the Trump administration "strongly supports" the bill.

Just last week, I bought underwear on the internet. Why should you know what size I take, or the color, or any of that information?

Underwear purchases are, of course, simply the tip of the iceberg. For parents, anyone knowing particulars and details about their kids, where they go to school, what kinds of books they buy them, or even something as personal as a web search about a child's medical conditions is a major breach of privacy and could result in undesired parties getting their hands on information they shouldn't have. And if internet service providers can sell access to our personal information... who will buy it? What will they do with it? Will they use it to sell us stuff we don't need?

Is all of this, too, simply the tip of the iceberg?