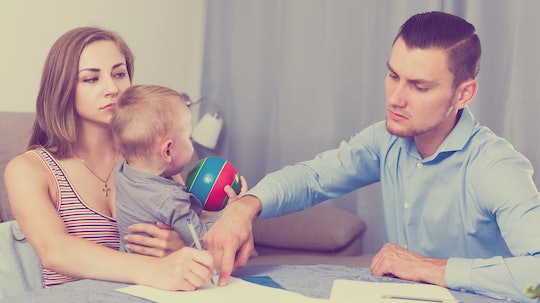 This Is The Best Child Custody Agreement For Divorced Parents, Study Says

There is absolutely nothing pretty about divorce. Even if it's for the best and all parties involved are certain to be better off. At its core, a divorce is the end of something, and it's only natural to grieve what was lost. Especially when there are children involved, a divorce is tricky territory. There are attorneys, courts, and custody battles that can often cause more damage than resolution. And while every family must do what's best for their own situation, new research says that the best child custody agreement for divorced parents is actually complete joint custody.

According to a new study from Uppsala University, Karolinska Institutet in Sweden and the research institute CHESS, "preschool children in joint physical custody have less psychological symptoms than those who live mostly or only with one parent after a separation." So, while of course it is sometimes necessary for one parent to have full or primary custody of the children, if it can be arranged for parents to share custody equally, this research suggests that it might actually be better for the kids in the long run.

It makes sense not to want to change too much about a child's living situation, but this new research is the first of its kind in looking at how custody arrangements actually affect children.

In order to determine what custody arrangement was better for children, "the researchers compared behavioral problems and mental symptoms of 136 children in joint physical custody, 3,369 in nuclear families, 79 living mostly with one parent and 72 children living only with one parent," according to MedicalXpress. And in this study, the researchers depended on surveys from parents and teachers assessing each child's behavior. And the results aren't too surprising when you think about them. According to a press release, one of the study's authors, Jani Turunen said:

What probably makes children in shared physical custody less stressed is that they can have an active relationship with both their parents, which previous research has shown to be important for the children's well-being. The relationship between the child and both of its parents becomes stronger, the child finds the relationship to be better and the parents can both exercise more active parenting.

Since this study was conducted in Sweden, there may be some cultural differences between families there and families in the United States, but the results seem to be pretty straightforward. Overall, children living in joint physical custody seem to be better off — psychologically speaking.

Of course, this isn't always an option for every divorced couple, so doing what's best for the children and the family as a whole is really the best course of action to take.