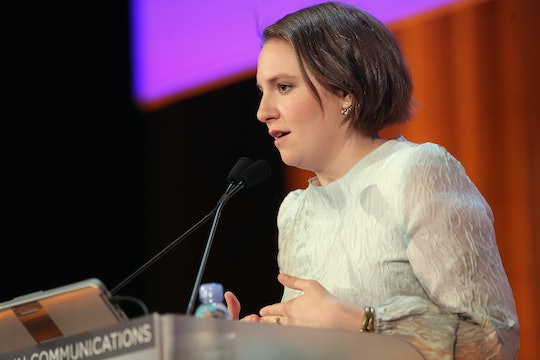 At the Matrix Awards in New York City on Monday afternoon, Girls creator Lena Dunham said that if Republican frontrunner Donald Trump became the president, she would seriously consider moving out of the country. Of course, some backlash is to be expected when a celebrity makes such a bold statement, but the responses to Lena Dunham's Canada comment on Tuesday devolved very quickly into sexist territory. It's not just that the comments about Dunham are totally gross and mean and tend to focus on her pants size but that, frankly, it's almost not even that surprising that they did. This is the Internet, after all, right?

Dunham, who is a fervent supporter of former Secretary of State Hillary Clinton told Andy Cohen, the host of the awards that she knows many celebs have threatened to relocate but that she is totally serious about it, saying, "I know a lovely place in Vancouver and I can get my work done from there." Donald Trump himself quickly responded to her comments on Fox & Friends on Tuesday morning saying that he's happy she would leave. "She’s a B actor and has no mojo,” he said. "That would be a great, great thing for our country if she got out."

Trump surprisingly, given his track record for disparaging women based on their appearance, didn't sink into straight up sexism in his response. The quality of Dunham's critically acclaimed work and her overall celebrity status make his comments something the writer and actor can brush off her shoulders. But people on Twitter immediately went the other way. And they went hard.

While I wouldn't normally like to promote hate, sometimes you have to see it to believe just how nasty people can be. Here's a sampling of some of the worst:

I can barely bring myself to go any further into the depths of the misogynist, cruel Internet. And the comments are definitely misogynistic. One Internet troll wrote that calling her "fat and ugly isn't misogynist" because they are facts. It's almost an instinct for people to immediately criticize Dunham based on her appearance as a reason not to like her — from both men and women, you might notice — because society still values women by their appearance and not by their talents. And it gets very icky, very quickly. Can you believe we live in a world where one woman calls another woman a "fat cow?" We aren't even nice to each other.

Just to compare, when Samuel L. Jackson said he'd move to South Africa if Trump were elected, the responses on Twitter focused on how he was a just a silly celeb, or they imagined action-film scenarios in which Jackson and Trump face-off on a plane. Is that because no one messes with Jackson or because Twitter doesn't bully men based on their appearance? When the Rev. Al Sharpton threatened the same, the response was a collective "good riddance," as well, but nothing about his appearance. When Miley Cyrus said she'd move, she was called an "ugly tramp."

So, sexist or nah?

If you don't like someone's TV shows or pop songs and would like to spend time thinking that a country is better off without their art, go right ahead and say it. But when you mock a woman based not on her work or ideas and simply because of her appearance or attempt to slut shame her (you should see some of the tweets about Dunham's sex scenes on HBO. They are NSFW), that's misogynist. Even more? It's hate.

The worst part is that there's very little to do about it, as Dunham has modeled by simply not responding to the comments from social media or even Trump's attack. We just have to raise little feminists to understand that this sort of critique isn't okay and correct people around us when they reach for words like "fat" and "ugly" to put down another woman (and why are they doing that anyway?). The next part is to simply wait for the rest of the world to come around.

Or just really hope we don't vote for people who hold sexist views that would perpetuate misogyny. But that might actually be harder than it sounds, if the Internet is any indication.