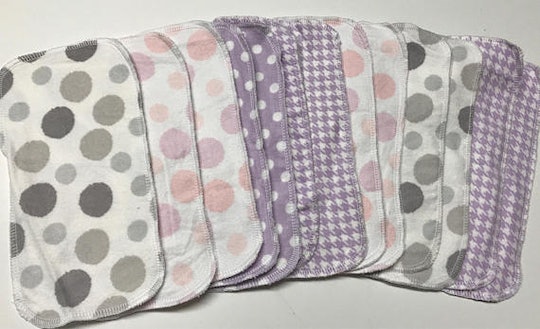 What with global warming looming in their children's future, most parents I know are trying to be more eco-friendly these days. For some, that means taking public transportation or car pooling. For others, it's taking a fabric shopping bag to the grocery store. How far would you go to protect the environment (and maybe, your wallet, too)? Cloth diaper far? Diva cup far? How about reusable toilet paper far? As it turns out, reusable toilet paper exists, and it's actually not the worst idea.

Here's how it works. According to Mothering, families can now buy rolls of "family cloth wipes" for their bathrooms. These wipes are made of cloth, Mothering explained, and after you use them to do your business, you deposit them in a special basket for later washing and re-use. The idea is that by washing these wipes instead of flushing toilet paper, you can save your family money and help the environment at the same time. You can buy family cloth wipes in multiple patterns and shades on Etsy and wholesale websites. Frugal Living NW also offered suggestions for making cloth wipes yourself out of old clothing and bedsheets.

So do you have to use re-usable toilet paper for — well, everything? Elizabeth Broadbent at ScaryMommy did, using cloth wipes and a spritz bottle for number two. (A veteran cloth-diaperer, she wrote that she enjoyed the reusable toilet paper up until the pee smell in her bathroom became too much.) But The Huffington Post reported that most consumers are only using the wipes for pee, which eliminates any E. coli risk. The smell aside, urine itself is actually sterile, they noted.

I know what you're thinking, and yes, a lot of people across the internet are pretty grossed out by this trend. But as Slate reported, the average person in the U.S. uses about 60 pounds of soft tissue paper each year, and the majority of that paper goes straight into the toilet. Because Americans like soft, plushy things, most of that paper isn't recycled, Slate also noted. And the environmental impact is staggering. In fact, toilet paper use is worse for the environment than fast food, McMansions, or those ever-popular SUVs, The Guardian reported. Amazingly, seven million trees are cut down each year just to feed the American toilet paper habit, according to Scary Mommy.

Beyond the climate change situation — which is plenty scary, especially for families with young kids to raise — I myself have a few bones to pick with regular toilet paper. Like, how hard it is to keep the house stocked with rolls, and how expensive toilet paper is to buy. I mean, I have a toddler, limited time, and stocking the refrigerator with three gallons of milk each week isn't exactly cheap. In fact, The Huffington Post reported that most families spend $140 dollars each year on toilet paper. In my household, though, it's actually more according to my monthly budget.

All in all, it's a good thing that Americans are starting to re-think some of their most entrenched habits. For the frugal and the eco-conscious alike, reusable toilet paper might actually be a good idea. My advice, though, is that everyone keep a regular paper roll around in any case — you know, for company.