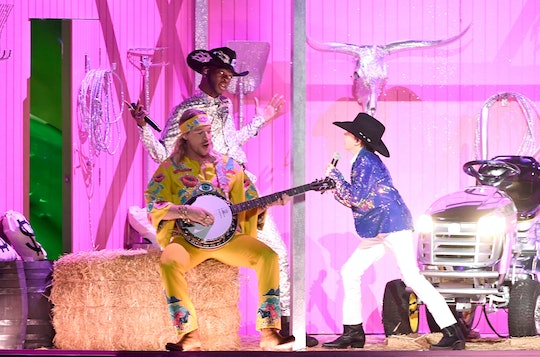 Was That "Old Town Road" Grammys Performance Real, Or Did My Kid Put It In My Head?

The first notes of the song began during the Grammys like they always do — with you quivering with fear. This is it, isn't it? "Old Town Road" starts, and your sanity goes as your toddler — and literally everyone else from ages 2 to 9 — loses their collective minds. And the "Old Town Road" Grammys performance gave that toddler anthem an actual mood with a truly wild set that included what looked like a skull covered in melting slime, the entire BTS group, that kid that became famous for yodeling at Walmart, and so, so much more.

It was your kid's favorite song — the one that was seemingly programmed in them at birth because you sure as hell have never listened to it — stuck in some kind of acid-fueled dream. It was lively. It was colorful. It was everything you'd expect of Lil Nas X and Billy Ray Cyrus. Your kid would be so pumped if they saw it.

Which is exactly why you need to rewatch it. My own 5-year-old was already in bed when the performance started, but my god, how she loves to sing "Can't nobody tell me NOTHINNNNNN'" at the top of her lungs in a sparkly outfit like I don't already know.

Truly, the performance was very "what the hell is happening" and also very "well this is delightful." Which is basically what parenting is like. It just makes sense that the song every child knows like some kind of weird biological function was performed with the utmost gusto. (And the utmost respect — did you catch the #24 on Billy Ray Cyrus' guitar as a dedication to Kobe Bryant? Also there's a Kobe jersey on one piece of the set. A very sweet, beautiful touch, especially after Cyrus wrote on Twitter that he would be dedicating the win for Best Music Video and Best Pop Duo/Group Performance to Kobe and his daughter.)

With Diplo in bright yellow on a ... banjo? (I don't know my stringed instruments) and a rotating set that managed to put BTS and Billy Ray Cyrus all together pantomiming driving a car, I was completely flummoxed and in love with the performance. It was as fluid and genre-bending as the song has always been, and truly had the confidence of a toddler doing literally anything. It was bold, it was fun, and it was exhausting. You see where this metaphor is going, right?

Just grab a rewatch via Twitter, your own DVR, the YouTube link above, or check the CBS app and Hulu to find a replay. It's absolutely, totally, bizarrely worth it.