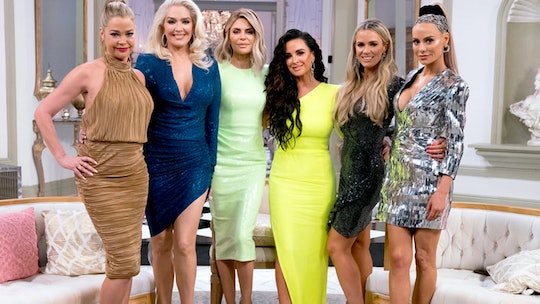 After months of "patience," the latest Real Housewives of Beverly Hills reunion is finally here, and fans are preparing for the best — and worst — pieces of drama to come out after a wildly emotional season. The three-part Bravo special begins airing on Tuesday, Jul. 16, and the network has already released the RHOBH Season 9 reunion seating chart, which spills a few secrets of its own.

Per Bravo, the seating arrangements for the Season 9 reunion goes as follows, from left to right: Denise Richards, Erika Girardi, Lisa Rinna, Andy Cohen, Kyle Richards, Teddi Mellencamp Arroyave, and Dorit Kemsley. Not going to lie, the seating chart feels a little weird. Not only are Season 9 players like Camille Grammer and Lisa Vanderpump missing from the list entirely, but fans also pointed out that Rinna managed to snag the highly coveted spot next to Cohen, and it felt like Bravo made no effort in separating alliances made on the show. Seriously, what could these ladies possibly argue about? Well, according to Cohen, a lot.

Following the Season 9 RHOBH reunion taping on Jun. 5, Cohen teased what's to come in the special. "Amazing & Surprising #RHOBH Reunion yesterday under unusual circumstances. We mentioned it ALL," the host wrote, adding a GIF of Real Housewives of New York City's Bethenny Frankel.

So what does "mentioning it all" really mean? Fans will just have to wait and see, but it could have something to do with Vanderpump's departure from RHOBH. Yes, if you don't already know, LVP skipped the Season 9 reunion and announced that she was leaving the show.

Speaking with Extra, Vanderpump revealed why she chose to make her RHOBH exit. “The last year was a very negative year for me. I feel like we’re moving forward. They have had their resolution," she said. "I just had a horrible time with the show and the women. It was a very sad time in my life and it wasn’t made any better. I just decided to walk away.”

Meanwhile, a week following LVP's announcement, Cohen opened up about her decision not to come to the filming of the Season 9 reunion. He also hinted at what could have been.

"I will refer you to what LVP said about Adrienne [Maloof] not showing up in the Season 3 reunion," Cohen said. "LVP was spot on and that’s kind of all I can say about that. I wish she had been there ... I really wish she would have been there and I think she would’ve done great and I hope and I think she actually could’ve left with some resolution."

That said, Vanderpump isn't the only cast member missing from the seating chart that might stir up a storm during the special. According to Us Weekly, Grammar attended the RHOBH reunion after causing a bit of drama during the second half of Season 9.

"Camille was in the hot seat," an insider told the publication. "The women were taking her to task."

No matter how strange you might find the seating chart for the RHOBH reunion, there is still quite a bit of drama that has yet to be uncovered. But is it enough to offset Vanderpump's absence? Probably not, but hey, that's not for me to decide.