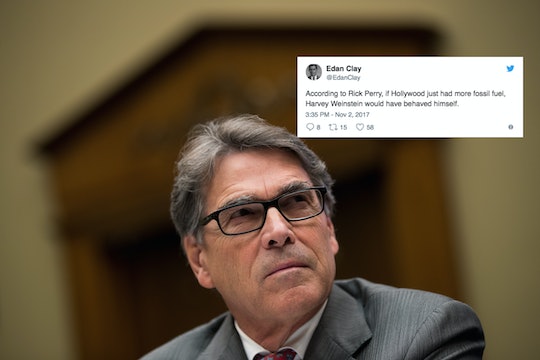 I'm just going to cut to the chase here: a lot of people say incredibly ridiculous, offensive, and hurtful things about sexual assault. And, unfortunately, one of those people seems to be Rick Perry, who apparently thinks fossil fuels and the light of "righteousness" will prevent sexual assault, according to The Hill. If your head didn't explode after reading that last sentence, congratulations.

For those of you who don't know already, Perry is the Trump administration's Secretary of Energy. Perry's job at the moment is to push for more fossil fuel usage in America and across the globe, because climate change isn't real, remember? President Donald Trump is obsessed with fossil fuels and so is Perry. It's a match made in air pollution heaven.

On Tuesday, while in conversation with Chuck Todd of Meet the Press and Axios CEO Jim VandeHei, Perry argued for more fossil fuels in places without electricity, like remote villages in Africa, according to The Cut. To make his case that fossil fuels would have a positive effect in these areas, Perry brought up an extremely flawed anecdote about sexual assault. Perry said, according to HuffPost:

Perry did not immediately respond to Romper’s request for comment.

There are so many things wrong here that I'm not sure where to start. First off, people are upset that Perry used a very serious and sensitive subject to push his fossil fuel agenda. There are a million other examples Perry could have used to illustrate his position, and there's absolutely no good reason why his take on so-called sexual assault prevention had to be one of them. It appears that Perry tried to take advantage of a very hot-button issue and epidemic in America right now, which is pretty upsetting. A number of people on Twitter also pointed out that you can get electricity from sources other than fossil fuels.

Secondly, electricity and "righteous light" doesn't stop people from sexually assaulting other people. The idea that electricity would somehow prevent a rape or other sexual assault crime is ludicrous, just like the idea that wearing modest clothing is another fool proof way to prevent sexual assault (hello, Mayim Balik, Michelle Duggar, etc.). Any anti-sexual violence organization in the country (or at least any good one) will tell you that sexual assault prevention starts with comprehensive education on consent. In fact, experts and lawmakers are advocating for sexual assault education to start as early as kindergarten. Kate Rohdenburg, who runs a violence prevention program for a group called Wise in Vermont and New Hampshire, said of how she goes about teaching the idea of consent to young kids, according to NPR:

Of course, we're not saying the word 'autonomous' to kindergartners. But we talk about who here likes hugs, and some kids raise their hand and some don't. Well, how are we supposed to know if this person wants a hug when they're feeling sad or not? And kindergartners will tell you that you should ask them.

Lastly, Perry's insinuation that "righteousness" will somehow prevent sexual assault is also false. There are a ton of religious leaders and "moral" people who have been accused of sexual assault, and the idea that holiness or morality prevents people from committing sexual crimes desperately needs to be debunked. Hundreds of priests have been accused of sexual abuse. Furthermore, if righteousness and electricity are true methods of sexual assault prevention, why does RAINN report that there are "321,500 victims (age 12 or older) of rape and sexual assault each year in the United States"? I think it's safe to say America is well-lit and full of people who believe themselves to be "righteous." Perry's comment is dismissive of anyone who has been sexually assaulted in a well-lit area — or even what some people might call a righteous space, like a church.

The secretary was making the important point that while many Americans take electricity for granted there are people in other countries who are impacted by their lack of electricity. One person told him about how light can be a deterrent to sexual assault and security in remote areas.

Although there are people out there who buy Perry's excuse, it's important that the Americans who don't continue to hold Perry accountable for his words, especially since he holds such a high position in the Trump administration. Perry's take on sexual assault prevention is not OK, and it should have no place in government.