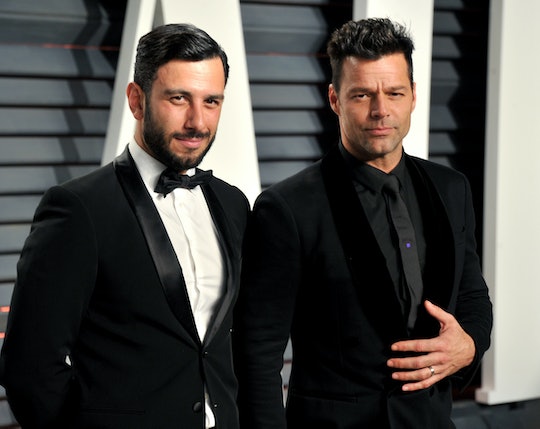 Another day, another adorable baby born to celebrity parents. Ricky Martin has welcomed his fourth child with husband Jwan Yosef, and the baby's first pic is incredibly cute. Making matters even sweeter? Martin also revealed the newborn's sex and name in the announcement shared Tuesday.

Martin first announced the impending arrival of his fourth child in September, sharing the happy news in a speech at the Human Rights Campaign National Dinner in Washington, D.C., slipping in the reveal after thanking Yosef, his 10-year-old twin boys, and then 8-month-old daughter for their support. "And by the way, I have to announce that we are pregnant," he concluded, according to ET Online. "We are waiting. I love big families." Aww.

Well, it looks like Martin and Yosef's family has officially expanded once again because the singer took to Instagram Tuesday to share a pic of the couple holding their new baby ... boy! Yep, the parents now have three boys and one girl.

Martin wrote the caption in Spanish, which translates to "our son Renn Martin-Yosef was born," according to E! News.

Of course, many well-wishers took to the post's comments section to congratulate the dads on their new addition.

"OH MY GOODNESS! FOUR!" one person penned. "You are amazing! Welcome beautiful Renn!"

Someone else said: "Handsome widdle man!"

One supporter said: "Blessings and more blessing to the whole fam."

Swinging back to Renn's name, it's unisex and peaked in popularity among U.S. parents in 2018, according to Baby Center. It's of French origin and translates to "reborn", or "little prosperous one," according to Nameberry. And in my humble opinion, I think it's lovely. But maybe I'm biased toward names that end in hard consonants.

Either way, I think it's safe to say Renn will grow up surrounded by a lot of love. He already has two big brothers (Valentino and Matteo) — who Martin welcomed via surrogate in 2008 — and a sweet sister named Lucia, who he and Yosef also welcomed through surrogacy.

Then there's little Renn's dads, who are the best parents ever. “First and foremost, I am a father," Martin told Hola! magazine on the topic of fatherhood back in September 2017. "My role as a father is one that I’m obsessed with. Every decision I make in my career or in my personal life is based on the well-being of my kids.”

Yosef is as equally as devoted, with Martin gushing to People en Español: "Jwan has many qualities and they made me fall in love with him. He is a fascinating person, extremely intelligent, talented, and he is a wonderful dad and husband."

It's unclear whether Martin and Yosef will have more children, but it's definitely a possible. That's because the singer previously talked about having loads of children down the line, telling People in January 2018, “I want four more pairs of twins. I would love to have a big family, but there’s a lot going on at this moment, a lot of work.

He added, “It’s a lot going on so we’re going to put things in order first and then we are going to get ready for many more kids.”

Holy moly! Four more pairs of twins? Although that might seem like a large number to wrap your head around, I have a feeling Martin and Yosef will be great parents no matter how many kiddos they have. Congrats on your growing family, guys!