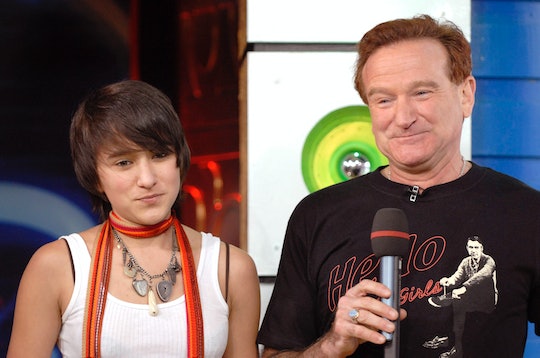 It feels like barely any time has passed since the world tragically lost one of the most beloved actors of all time. So when Robin Williams' 30-year-old daughter Zelda tried out the Disney Instagram filter everyone is using recently and matched with one her dad's iconic characters, the internet was understandably overcome with emotion.

As you may have noticed while browsing through your feed, Disney has created a new filter for people to use on their Instagram Story that has already become super popular. It matches up a social media user's face when they take a selfie with the Disney character they are most like. For example, The Lion King's Simba or maybe Quasimodo from The Hunchback of Notre Dame.

When Williams' daughter Zelda tried out the new Disney filter on Instagram recently, it turns out she was matched up with the Genie from Aladdin. As the late actor's fans remember all too well, he was the voice of the original Genie from the 1992 movie, which made this especially poignant for basically everyone who saw it when his daughter shared the result on Twitter with the comment "Welp... "

Zelda Williams laughed when she was matched with her dad's Disney character, much as her father probably would have in the same situation.

Robin Williams died in August 2014 at the age of 63, leaving his three children behind. Since his death, life has obviously gone on for Zelda and her two brothers, Zak and Cody. Her younger brother Cody got married on what would have been her father's 68th birthday in July, according to USA Today, while older brother Zak welcomed a baby boy in June and named him McLaurin Clement Williams. McLaurin was his father's middle name, according to CBS News.

Williams' family clearly continues to honor his memory in very conscious ways, but there was something about seeing Zelda Williams matched up with the Genie in the Instagram filter that felt so immediate and emotional to social media users. As one fan commented, "That mysterious force in the universe we just can’t explain, it’s called LOVE..." Another said, "Thank you for sharing. This made my eyes leak." One more wrote, "The apple falls not far from the tree, and I mean that as a high compliment. Your father was nothing if not the embodiment of optimism and whimsy."

It is true that Zelda Williams looks quite a bit like her father, but it's also true that she appears to carry his same self-effacing sense of humor in her, too. The Disney Instagram filter may have just picked up on that, and managed to give Robin Williams' fans a sweet reminder that his memory continues to live on.

More Like This
Quinta Brunson Got A Sweet Card From A Kid On Abbott Elementary After Her Emmy Win
Quinta Brunson Had To Give Her Emmy Speech With Jimmy Kimmel At Her Feet
'Squid Game' Is Coming Back For Season 2 On Netflix: Here’s What Parents Need To Know
Kate Middleton Has A Nice Theory About The Rainbow Sightings After The Queen's Death