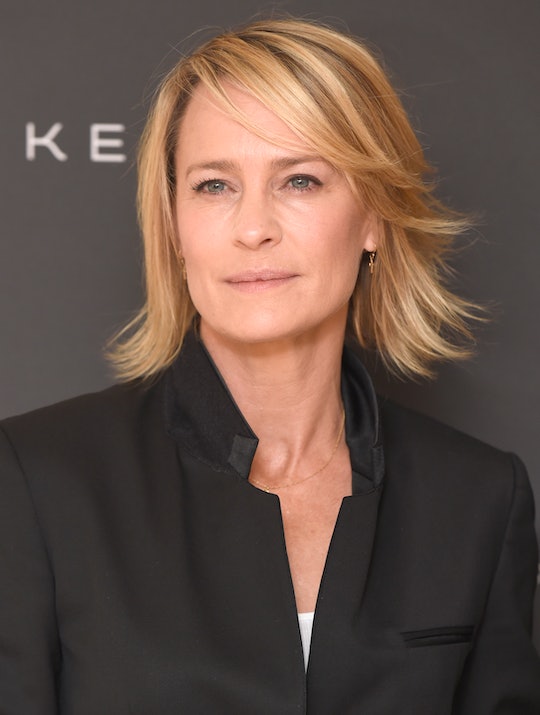 Any fan of House of Cards knows... you don't mess with the Underwoods. Either one of them. Sure, Frank Underwood might be the man in charge, as it were, president of the United States and all that jazz. But you'd be a fool to think he's in any way above his wife Claire. And Robin Wright, the actress that plays the FLOTUS/aspiring VP, is no fool. Speaking about a 2016 salary discussion with executives over what she would be paid for her role on the hit Netflix hit show, Wright said she wasn't nervous to ask for equal pay — because she's Claire Underwood, dammit, and Claire knows how to get it done.

In an interview with Net-a-Porter to discuss her upcoming role in Wonder Woman (out in theaters in February and I can't talk about it without hyperventilating), Wright opened up about a time when she had to fight the studio to be paid the same amount as Kevin Spacey, who plays the unflinching Frank Underwood. Between 2014 and 2016, it seems, Spacey's pay per episode went from $500,000 (before Season 3) to $1 million. Wright's pay stayed at $420,000 per episode. While Wright believed she was being paid the same amount as Spacey, she discovered this was not true, according to her interview with the media outlet:

I was told that I was getting equal pay and I believed them, and I found out recently that it’s not true.

Lying to Robin Wright? You think that's a good idea, guys? Not only does she play Claire Underwood, the cog behind the wheel that is political America on House of Cards, but she's also an experienced industry player with staying power.

Wright noted that the Underwoods are equal players on the show, and that alone should merit equal pay for both leads:

Claire and Francis are equivalent as far as their power, their union, and the plot. I may not have as many scenes or words as Francis, but Claire doesn’t need to verbalize as much. Francis is an orator, a poet, a demonstrator. Claire is an [ego] that sits in the back and directs him, but they are partners on the same plane.

When asked if she was nervous about demanding equal pay, she gave the perfect answer (and a lesson to us all, I believe);

Not for a second. It was just fair, on principle.

Because obviously. The fact that Wright even had to ask to be paid the same amount as Spacey after having been nominated for five Emmys for her work on House of Cards is a sign of how much longer the road ahead stretches out before us. But apparently, the longer we're on that road the easier it will get to demand equal pay. When asked if she would have dealt with the situation the same way when she was younger, Wright admitted, "I would never have felt I deserved it back then."

Perhaps the message from Wright is simply this: Stay the course. It will get easier.