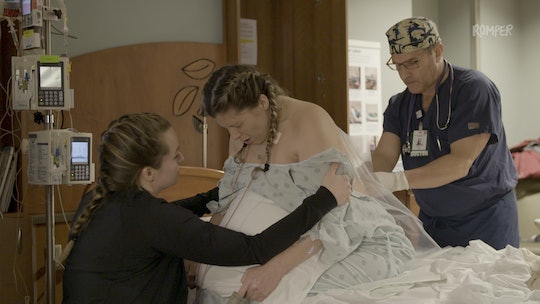 What If Stories Of Loss During Birth Were Shared & Honored?

**Content Advisory**: This article and the video below address sensitive topics such as infant loss. Reader/ viewer discretion is advised.

Not every pregnancy ends with a joyful baby announcement on Facebook. In an age when social media often seems to amplify only the stories of people around us getting their happy endings — engagement rings, new jobs, baby wishes come true — it’s more important than ever to acknowledge, to share, and to honor the other realities and experiences in life. In Episode 2 of the second season of Romper’s Doula Diaries, the birth journey of Amy Spagnola, a single mother living in Dover, New Hampshire, proves this. Amy chooses to carry her baby to term after receiving a fatal diagnosis of anencephaly partway through her pregnancy. She is supported in this journey by Melissa Shaw, a doula who believed Amy’s labor, delivery, and journey of motherhood deserved loving support and care.

Among women who know they're pregnant, the March of Dimes estimates that about 10 to 15 in 100 pregnancies end in miscarriage; the organization says the actual number of pregnancies that end in miscarriage may be as high as fifty percent. Stillbirth is much more rare, affecting about 1 percent of pregnancies in the U.S. Of the stillbirths that occur each year, only a few happen during labor and delivery. Unable to know what her story would be, Amy chose not to keep the fetal monitor on during labor.

Around seventeen weeks into her pregnancy, she learned that her baby had a fatal condition called anencephaly, an extremely rare birth defect that the CDC reports occurs in about three pregnancies in every 10,000 in the United States. There is no known way to prevent, cure, or treat anencephaly, and, according to The Cleveland Clinic, infants with the defect, which prevents major parts of the brain, scalp, and skull of the fetus to form, are stillborn in about 75 percent of cases. Newborns who survive past birth are unconscious, cannot feel, and are usually blind and deaf — and they will die within several hours, days, or weeks.

It is a story that demonstrates the utter importance of support for pregnant people through one of the most profound and vulnerable experiences of their lives.

Faced with those facts, Amy decided to carry her baby, whom she named Serenity, to full term in hopes that she would be born alive and possibly be able to provide lifesaving organs to another infant. “It would help me so much to know that she was out there somewhere, helping someone’s heart beat,” Amy says in the episode.

She shared her decision on Facebook, and that’s how Melissa, a doula and a mother of three herself, found Amy, and decided to offer her doula services for free.

“I was actually very hesitant at first because, of course, being a new doula, I didn’t have experience [with situations like this] yet,” Melissa tells Romper. “And my [children], fortunately, were all very healthy. So I actually had to sit on it for a little while, a couple weeks, before I finally reached out to her about it.”

Amy at first was unfamiliar with the idea of a doula, but after meeting with Melissa for the first time and learning how she could help, the two bonded and began the journey together. It’s that journey you’ll witness in the episode, below.

“I guess I just figured that if she could be so selfless, that I could too,” Melissa says.

As you’ll see watching the episode. Amy and Melissa’s time together isn’t only a story of sorrow and devastation; it’s also a story of transformation and the beauty of being there for someone else, of being there for yourself. It is a story that demonstrates the utter importance of support for pregnant people through one of the most profound and vulnerable experiences of their lives.

These stories, the struggles, are just as important and valid, just as true, as the other stories we tell.

Infertility, miscarriage, and pregnancy loss are topics that have been brought to light thanks to everyday women and public figures like Michelle Obama and Chrissy Teigen who are willing to share their own stories so that other women feel less alone. Instagram accounts like I Had A Miscarriage, started by Dr. Jessica Zucker, a psychologist specializing in women's reproductive health and maternal mental health, and herself a survivor of pregnancy loss, have created space for stories of loss to be acknowledged and normalized. At Romper, our own TRYING project, in which we follow five women as they try to conceive, launched last summer with the mission of giving a voice to the experience of trying — and often failing — to become a mother.

We are so grateful to Melissa and to Amy for inviting us into their story. Because we know that these stories, the struggles, are just as important and valid, just as true, as the other stories we tell. It’s not just because they can help us all feel less alone in our own losses and disappointments; it’s because these experiences themselves are deserving of acknowledgement just as much as the happier stories. There is sadness and heartbreak, there is pain and anger and confusion, but there is also beauty and strength that comes in these broken moments. There is grace.

The second season of Romper's Doula Diaries consists of four eight-minute episodes each containing a new doula and mother narrative across different socio-economic backgrounds as their clients are days away from their births. Each episode reveals the true strength of mothers and the powerful support system a doula can provide. Here is Amy’s story:

For help and support during or after the loss of a pregnancy, the March of Dimes offers resources and support. If you or someone you know is experiencing postpartum depression or anxiety for any reason, contact the Postpartum Health Alliance warmline at (888) 724-7240, or Postpartum Support International at (800) 944-4773. If you are thinking of harming yourself or your baby, get help right away by calling the National Suicide Prevention Lifeline at 1-800-273-8255, or dialing 911. For more resources, you can visit Postpartum Support International.