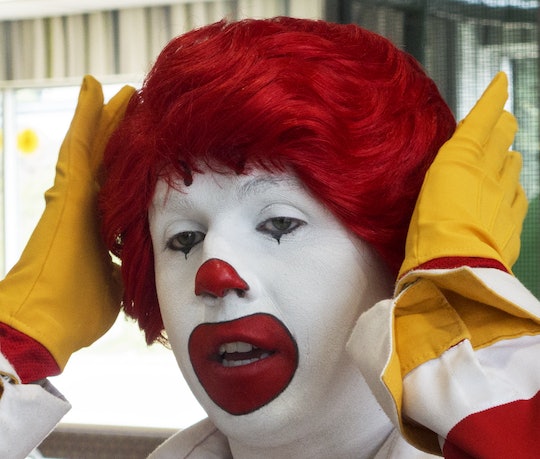 I knew this day would come. As soon as "creepy clown hunting" became a thing, I started to hear the death knell for regular clowns. I could picture them shuffling away from their windows noiselessly in their floppy shoes, nervously trying to cover their neon wigs under baseball caps. Closing the blinds to paint their faces in their dark living rooms. And now the world's most famous clown has fallen victim to the stigma: Ronald McDonald is lying low until this whole creepy clown thing dies down, and no one is blaming him.

While the whole country seems to be swept up in creepy clown sightings (the real kind and the fake kind, since there appear to be an abundance of both), it looks like the Hamburglar or even Grimace are going to have to take over for Ronald McDonald for awhile. McDonald's spokeswoman Terri Hickey released an emailed statement on Tuesday which read in part:

McDonald's and franchisees in the local markets are mindful of the current climate around clown sightings in communities and as such are being thoughtful in respect to Ronald McDonald's participation in community events for the time being.

Here's hoping the Hamburglar has what it takes to step into Ronald's somewhat oversized shoes.

So here's the thing; I get it. I get that the thought of creepy clowns menacing the charming, sleepy little towns of America is horrific. I get that some of these clown sightings were real, and that little children were genuinely frightened by them. But not all clowns fall under the "creepy" designation by default, do they? Are we really living in a world that is trying to break down gender barriers, end racism and discrimination... but finds actual clown hunting perfectly acceptable?

I am here to take a stand on the side of Ronald McDonald. Enough is enough, people. What has he ever done other than offer us delicious empty calories? Sure, eating one Big Mac is probably going to destroy your daily fat intake, but they are oh-so-delicious and Ronald always offered them with that same painted on, innocent smile. Yet now he has been forced into hiding by vigilantes with a thirst for clown blood.

Poor Ronald, losing his job because of some clown discrimination. How is he meant to be paying his rent now? I picture him living with other clowns, all probably out of work and running out of white face paint. How terrified they must all be.

There's only one thing for it now: Mayor McCheese needs to step in and speak up on Ronald's behalf. He is the true voice of authority in this otherwise crazy world.