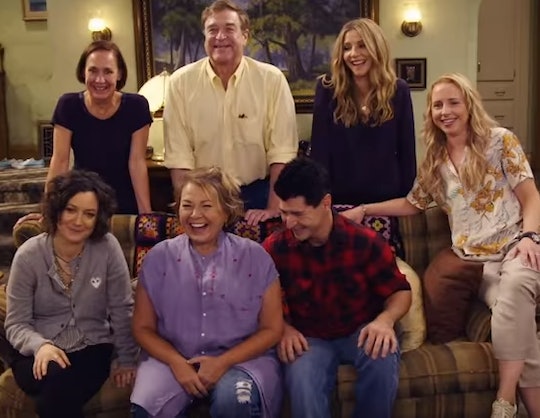 'Roseanne' Is Coming Back For Season 2 & Twitter Has Some Feelings

Comedian Roseanne Barr has made a career out of being controversial. Sometimes it works well, as it seemed to in the almost 10 years her hit show, Roseanne, was on television. Maybe because it was tinged with just enough sweetness and heart to make it palatable and warm. Sometimes her need to be inflammatory is off the mark, and here I'm just going to say *national anthem.* Fans of the original series of Roseanne were anxious to see which way the 2018 reboot would work, and I guess they have their answer. Roseanne is coming back for season two, but not everyone on Twitter is i love with the idea.

In the new series, all of the same characters fans recognize from the original series are back; Roseanne, of course, and her husband Dan (played by John Goodman). Their three kids Becky (Alicia Goranson), Darlene (Sara Gilbert), and D.J. (Michael Fishman). Roseanne's sister Jackie, played by Laurie Metcalfe, is also back, and weirdly enough, Sarah Chalke (who also played Becky in the original series) came back as well, this time to play a middle-class woman who hires Becky as her surrogate named Andrea. The first episode was released on ABC on Tuesday night to huge ratings, 18.4 million viewers.

The network announced on Friday that it would be bringing the show back for another season, which probably didn't come as a huge surprise considering the ratings. Whether it was a surprise or not, there were plenty of people on social media who weren't especially enthused to see more Roseanne. Whether or not the issue was Roseanne Barr herself, a very vocal supporter of President Trump (who incidentally called Barr on Wednesday to congratulate her for the solid ratings, and we all know how he feels about ratings), or because of the heated politics of the show, it's tough to say.

Fans of the reboot praised what they saw as a positive level of representation of both sides of the fence, the left and the right. While neither Hillary Clinton nor President Trump were mentioned, a large portion of the story line in the first episode was dedicated to the rift between Roseanne and her sister Jackie during the election. Jackie (wearing a pink pussy hat and a "Nasty Woman" t-shirt) voted for Clinton, while Roseanne voted for Trump. Actually, Jackie meant to vote for Clinton but accidentally voted for Jill Stein instead, insert laugh track here. There are other issues, of course, Roseanne and Dan are getting older and struggling to pay for their medication, Darlene has moved home with her two sons (one of whom is non-gender conforming, which was somewhat refreshing), and D.J. is newly home from a tour of duty in Syria.

Unfortunately, some people saw the attempt to add levity to the political climate as tone-deaf and offensive.

Many people seemed to take umbrage with Roseanne Barr herself more than the actual show.

Still, as funny as the show was at certain points, there was definitely something more chilling about the way Roseanne dealt with the political debate. As Roxanne Gray wrote in The New York Times:

In the show, during an exchange about their political disagreement, Roseanne tells Jackie one of the reasons she voted for Mr. Trump is because he “talked about jobs.” And that was all the political ideology we got. If we are to believe the circumstances of this character’s life, a few vague words about “jobs” was more than enough to compel Roseanne, with inadequate health care, with vulnerable grandchildren, and struggling to make ends meet, to vote for Mr. Trump.

Here's hoping that the Roseanne reboot will do what it seems to promise; find a way to bridge the yawning divide between left and right with humor and warmth. It could make for a nice change.

More Like This
Exclusive: Watch How A Group Of Princesses Save The Day In Netflix's New Animated Series
Brandi Carlile Is “Finally Cool” To Her Two Adorable Daughters
Kendrick Lamar Owes His Latest Grammy Nominations To His Two Children
Adele’s Grammy-Nominated Album Features A Beautiful Song Written For Her Son Angelo
What Parents Are Talking About — Delivered Straight To Your Inbox