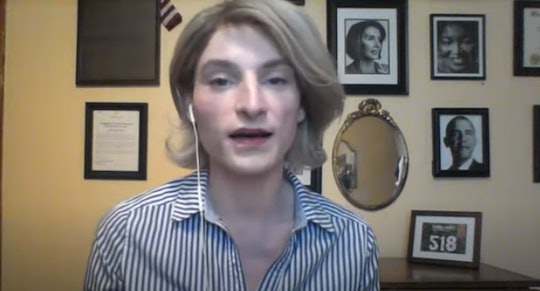 On June 9, Ketchum won a seat on the Wheeling City Council, making her West Virginia's first openly transgender person to ever be elected in the state. This is a major win considering there are only 26 openly trans people who have been voted into office in the entire country, according to The Victory Fund, a "national organization dedicated to electing openly LGBTQ people who can further equality at all levels of government." Ketchum is now the 27th to join that list.

Mayor Annise Parker, president and CEO of the LGBTQ Victory Fund, said in a statement that Ketchum's win is momentous. "Rosemary has shattered a lavender ceiling in West Virginia and will join the growing number of out trans elected officials serving nationwide," Parker said. "Trans people are severely underrepresented in elected office — with just 26 out trans officials anywhere in the country — so Rosemary’s victory will resonate well beyond her state."

Ketchum was raised in a blue collar family in East Liverpool, Ohio, according to her campaign website. Her mother was a waitress while her father was a factory worker. The family struggled after a fire destroyed their home in 2010 and were homeless for a brief time, an experience Ketchum said on her website she "will never forget."

In a March video interview with Trans IRL, Ketchum explained that she knew she was trans when she was 5, and her parents "recognized that early on" even if they hadn't been exposed to many LGBTQ people in real life, or even on television. "I can remember Will & Grace being the first foray into LGBTQ community, and for my parents, that was their first introduction into what it meant to be LGBTQ," she said. "Of course, there was very little trans representation on there, but growing up, my parents were very interested in learning everything about the LGBTQ community."

Representation makes a huge difference, of course, and now Ketchum is part of that. In her political office, she hopes to help improve affordable housing, tackle opioid addiction, and encourage young people to stay in Wheeling. And considering a study by the Williams Institute found that West Virginia has the highest percentage of trans teenagers in the country, Ketchum is uniquely positioned to affect the future of Wheeling.

"As we know Rosemary’s race will inspire other trans people from conservative states to consider a run for office in their communities — and then those candidates will inspire others as well. That virtuous cycle is the key to building trans acceptance and political power long-term," Parker said in a statement.

Ahead of her victory on Tuesday, Ketchum shared on Instagram that while "running for office was never in the plan," she has "always believed that when you see something wrong you do what you can to fix it."