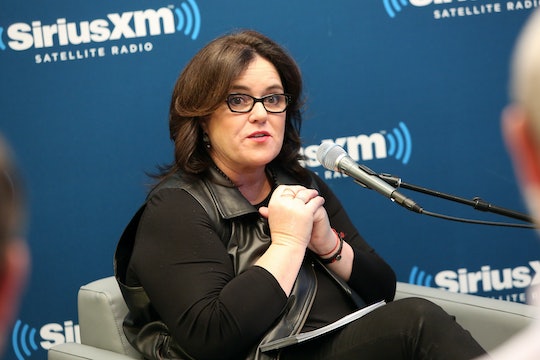 Well, that didn't take long. Shortly after Donald Trump's Saturday Night Live appearance, Rosie O'Donnell responded to Donald Trump's joke on Twitter, and her reaction was perfect. For those who missed it, the Republican party nominee took a jab at Rosie O'Donnell in his opening monologue on Saturday Night Live. Not that this should come as a total surprise. The two of them have a long-standing feud that dates back to December 2006, when O'Donnell first spoke out against him on The View.

In fact, Rosie O'Donnell was the first person he referenced during his monologue (aside from himself), showing just how unafraid he is to remind everyone about their feud. And despite that fact that he claimed he doesn't, "hold grudges against anybody," he still referenced a years-old spat. I see what you did there, Mr. Trump. He went on to say, "Like Rosie O'Donnell. She said some things about me that were hurtful and untrue. I said some things about her that were mean, but completely accurate." What? But didn't he just say he was a nice guy? I'm so confused!

Thankfully, O'Donnell took to Twitter to respond to the line about her. Well, technically, she responded to a fan's tweet about the line.

Is it just me, or does O'Donnell sounds a bit tired about the whole thing? Perhaps I'm imagining things. Either way, after nearly a decade of this feud, I wouldn't blame her for being over it. I know I am.