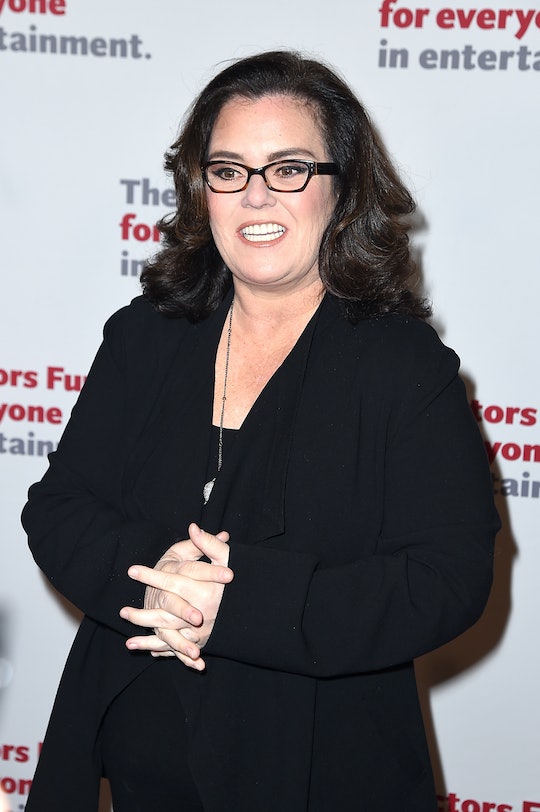 President-elect Donald Trump and Rosie O'Donnell have had a long-standing, public feud, and neither party has shied away from speaking his or her mind about the other. But O'Donnell came under fire recently after she shared a YouTube video that speculated that Trump's son, Barron, was actually autistic. The video, which claimed to be an anti-bullying video in honor of Barron, pointed out a variety of behaviors seen displayed by the boy in footage from his father's presidential campaign, rallies, and debates, all of which are meant to suggest that Barron could have Autism Spectrum Disorder. But the video itself actually feels pretty demeaning, and although she has since defended her position as not being a criticism, Rosie O'Donnell saying Barron Trump could be autistic is not OK.

I apologize to @MELANIATRUMP – i was insensitive in my RT – i am sorry for the pain i caused – it was not my intent – i am truly sorry.

According to Us Weekly, O'Donnell first shared her thoughts about Trump's son on Twitter on Nov. 21, when she posted a link to the YouTube video, and wrote, "Barron Trump autistic? If so — what an amazing opportunity to bring attention to the AUTISM epidemic." It wasn't long until O'Donnell started receiving backlash for her comment, with many Twitter users replying to her message and calling her out for what they felt was cruel and unfair targeting of a young child. (O'Donnell's rep did not immediately return Romper's request for comment.)

On Saturday, O'Donnell took to her own website in an attempt to clarify her statements about Barron, which she said weren't actually in reference to her feelings about Donald Trump at all, but about an observation she made about Barron as the mother of a child who has high-functioning autism. In her post, entitled "what we see and why," O'Donnell explained that her 3-year-old daughter, Dakota, was diagnosed in September, and that she herself has "been immersed in that world/reality since." She went on to say that she found the video about Barron "educational and informational," and that she thought that, if Barron were indeed autistic, the fact that he's now in the spotlight as the son of the next president could translate into an opportunity for better awareness about the disorder.

In a way, O'Donnell's position is understandable. As the mother of a newly diagnosed child, it would make sense that she would welcome the idea of having a president whose child is on the spectrum, since it could potentially open up a world of opportunities for greater understanding, empathy, research, and treatment — or at least a conversation. As a mom myself of two children born extremely premature in 2012, I remember thinking a similar thought when, Kim Kardashian's daughter North was born five weeks early in 2013. As much as I'd never actually wish a premature birth on any parent or child, the idea that someone as headline-worthy as Kardashian could end up talking about — and normalizing — things like prematurity and the agonizing difficulty of having a child in the NICU seemed promising, and like it could benefit all the parents out there just like me who struggled with feeling like no one really understood what it was like.

But the difference though, as many Twitter users pointed out in response to O'Donnell's message, is that, well, we don't actually know if Barron Trump is autistic, and even if we did, it's none of our business. Neither Donald nor Melania — nor anyone else for that matter — has commented on the speculation, which means that all the video has really done is put a 10-year-old boy in the spotlight, analyzing the way he walks, claps, and stands nervously on a stage as a way to suggest there is something wrong with him. I am by no means a fan of Donald Trump, and there's no denying he's fair game for criticism as a public figure who has certainly not had any problem speaking his mind. His children, on the other hand — and particularly his youngest child, who is only 10-years-old? Barron has every right to his privacy, and it's awful to think that he has become a target for online criticism and scrutiny just because his father decided to run for president.

What's more though is that, despite claiming that it is defending Barron and making a point about not judging and bullying, the video itself is pretty judgmental. The music is sad, and the clips indeed make Barron's behavior seem "strange." There is clearly only one conclusion you're supposed to make from watching it, which is that Barron Trump has autism, and that it's heartbreaking that he's not a "normal" kid. That's problematic for many reasons, not the least of which being the fact that, hey, he's only 10. If my father ran for president and suddenly I was expected to stand on stage in front of thousands of people, I'd probably come across as "acting weird" too — and I'm 30 years old. It doesn't mean I'm "anti-social" as the video claimed, or that I have a disorder, it just means that standing on a stage in front of thousands of people (and millions more watching at home on television) is downright scary.

But it's problematic for another reason too, a more important reason, which is the fact that, still, in 2016, autism is looked at as something that is worthy of judgment. That it's sad, shameful, something to be pitied. Even O'Donnell's reference to autism being an "epidemic" (which, according to Scientific American, may not even be true) speaks to the underlying notion that children with autism aren't normal or OK as they are. There's no question that having a child with ASD is challenging (and in many cases, extremely and exhaustingly so), but as with all disabilities, viewing autism as a one-sided handicap that is 100 percent bad and wrong all the time is incredibly ableist, and ignores the fact that children with autism still have meaningful lives and are loved by people who, in a lot of cases, wouldn't "fix" their children even if they could.

As Jeanette Purkis — an author and autism advocate who is herself on the spectrum — argued in a piece for The Mighty, autism "isn’t a curse or a plague," but "simply a different way of processing the world and responding to it." She also noted that even though they might share a diagnosis, all children on the spectrum are individuals, and deserve to be treated that way. Purkis wrote, "There’s a saying about autism: 'If you have met one person with autism, you’ve met one person with autism.'"

Rosie O'Donnell may very well be in the process of adapting to her daughter's recent diagnosis, and it's entirely understandable that doing so would be a challenge at times. But unless or until either of Barron's parents decide to comment on the speculation, calling a child out as potentially autistic is unfair and uncalled for. And even if he does indeed have ASD, Barron is still under no obligation to share that information, or be anyone's advocate other than his own. His father may be controversial (to say the least), and not even very likable, but Barron Trump deserves just as much privacy and freedom as any other young boy who hasn't chosen to grow up in the spotlight. And while we're giving him that privacy, perhaps we could also try and be mindful of all the kids who do have ASD, who deserve to hear better messages about themselves and who they are than being defined by a set of behaviors outlined in a YouTube video.