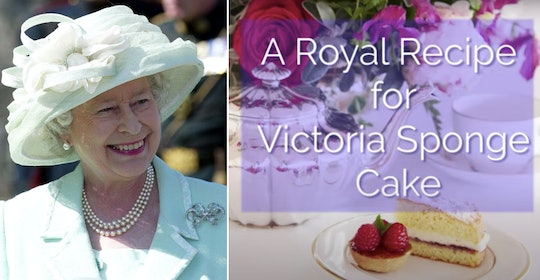 Normally the month of May brings an amazing garden party on the grounds of Buckingham Palace, but not in 2020. Due to the ongoing pandemic, people won't get a chance to attend the soiree with the queen, but we can all still eat like the royals would. In fact, the royal family has shared a decadent cake recipe that goes back to the days of Queen Victoria herself. And it has to be pretty good because she apparently ate a piece every afternoon — now there's a royal tradition after my own heart.

On Wednesday, Buckingham Palace shared a recipe straight from the royal pastry chefs for a Royal Victoria Sponge Cake, which was initially made famous by Queen Victoria since she enjoyed this particular sweet with her afternoon tea. A Victoria Sponge, as some of you Great British Bake-Off fans will already know, is a light cake filled with lots of jam and buttercream icing. It's considered a favorite for afternoon tea in Britain, and of course a particular favorite of garden parties like the ones Queen Elizabeth normally hosts this time of year.

Every year, her Royal Highness welcomes more than 30,000 people to four garden parties, three at Buckingham Palace and one at the Palace of Holyroodhouse in Scotland. Guests get all dressed up in fancy hats or fascinators, drink tea and eat loads of cake and mingle with Queen Elizabeth and Prince Philip.

While these garden parties have been canceled for 2020 due to the pandemic, at least you can still eat your cake. And make it just the way the royal family would eat it.

The recipe appears to be pretty simple for the most part, you don't even have to make your own jam or anything. You will need a few baking staples like unsalted butter, caster sugar, self-raising flour, eggs, vanilla essence, strawberry or raspberry jam, and icing sugar. You can find the full recipe on the royal family's website.

While Queen Victoria might have loved this sponge cake so much they named it after her, Queen Elizabeth has a different favorite. According to Darren McGrady, the former personal chef of the queen, she loves a chocolate biscuit cake. Like, really loves it. As McGrady told TODAY Food, "It is her favorite cake that she eats until it is all gone. If there is anything left when she has it at Buckingham Palace, it then goes to Windsor Castle so she can finish it there. I use to travel on the train from London to Windsor Castle with the biscuit cake in a tin on my knee. It was half eaten."

So now if you feel like making cakes beloved by two queens, you'll have the recipes for both. Like your own personal garden party.