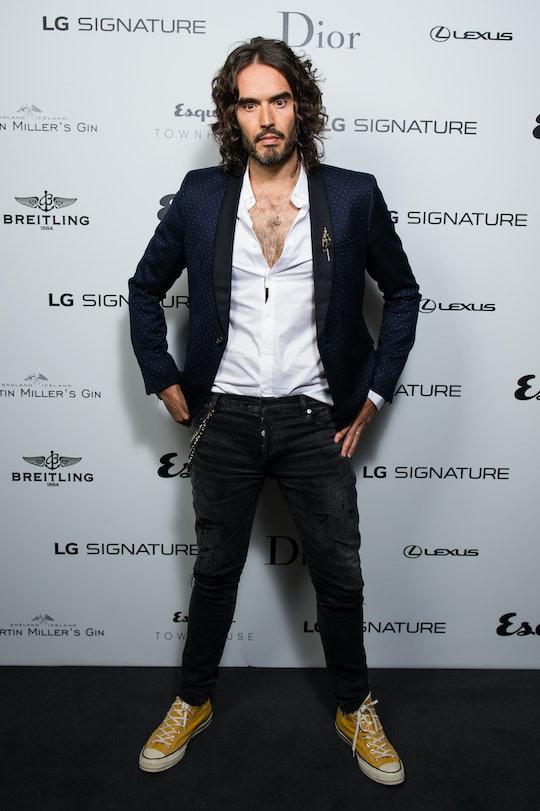 Russell Brand Says His Wife Handles The Childcare, & Twitter Isn't Having It

Welcoming a baby into your life can definitely feel straight-up magical, and comedian and dad-of-two Russell Brand has made it pretty clear in the past that he's totally in awe of his two young daughters, 2-year-old Mabel, and 6-month-old Peggy. But in an interview with The Sunday Times published this week, the outspoken star revealed that while he certainly may have a philosophical appreciation for parenting, the day-to-day grunt work of childcare really isn't his thing. In fact, Russell Brand admitted he leaves most parenting tasks to his wife, and well, it didn't take long for social media to eye-roll so hard.

To be fair, it isn't exactly surprising that Brand is making headlines for saying something outrageous — he's basically built his entire career upon doing that. But, given that, in the same interview Brand made a point to praise the #MeToo movement, and that he often writes and speaks about spirituality and self-improvement, it does seem pretty backwards that he considers it totally fine to be clueless when it comes caring for his children. When asked about his daughters, Brand admitted that he rarely watches both girls solo, and that his wife "wouldn’t go away for 24 hours," because while he may be "very, very focused on the mystical connotations of [his children's] beauty and grace," he's "not so good on the nappies and making sure that they eat food."

Brand then explained that, on occasions when he has had to be in full dad-mode, it didn't go so well, and that since his wife is "able to sustain and maintain domesticity in a way that's astonishing," he mostly just "[does] whatever he's told." He then went on to explain that his wife "is extremely well-versed in the nuances and complexities of child-rearing," and that while he considers himself "dedicated to [parenting," he's "still surprised when it’s like, 'Oh my God, this is f*cking really hard and it's so exhausting." He then added, "the younger one, I just feel inept so quickly, like with the crying."

Perhaps at the very least, Brand might get some credit for being honest about his feeling of parental uselessness, particularly given that there are still so many women out there who likely understand exactly how Gallacher feels having a partner who doesn't see child care as his responsibility. But what Brand, and all the other men like him, would do well to realize is that it's not that women are magically so much better at caring for children, or remembering things like extra snacks in the diaper bag, as Brand seems to suggest. It's really just that someone has to do it, and in the absence of an involved, plugged-in partner, all too often it ends up being women.

Toward the end of the interview, Brand did say that he does try to be a good dad, and noted that he'd dropped his oldest daughter off at play school by himself a day earlier. But overall, Brand's view of the situation is pretty clear, as he then told The Times, "I'm sensitive and awake and aware, so I have to dial a lot of sh*t down to go through normal life."

Unsurprisingly, it didn't take long for those on social media to grill Brand for his comments, particularly as he also tries to come across as someone who is all about enlightenment:

As infuriating as Brand's take on parenting clearly is though, there are signs we at least have reason to be hopeful about the current state of fatherhood overall. A study published in June in The Journal of Marriage and Family, for example, found that most fathers today are spending more quality time with their children than in previous years, and that the majority of dads studied were more "physically" and "emotionally" engaged with their kids than in previous generations. In other words? Hopefully dads like Brand are outliers.

Unfortunately, that improvement doesn't mean there isn't still a huge disparity between the caregiving roles assumed by men and women. In a 2018 report from the United Nations, women were still found to do about 2.6 times the amount of unpaid work that men do, according to The New York Daily News. That isn't just childcare though — the physical and emotional labor also includes things like housekeeping, caring for elderly parents, and managing household expenses. But when you consider that women are still going out and working their normal paid jobs (according to the Bureau of Labor Statistics, women made up almost half of the workforce in 2017), it seems ridiculous that they are also still expected to pick up the slack in other areas as well.

Of course, it seems that the explanation for that problem might also be found in Brand's comments as well. While he may not be proud of the fact that he can't take care of his own children without the help of his wife, he appears to reassure himself with the fact that, well, Gallacher is just so darn good at it, so why not just let her handle things?

What Brand is clearly missing though, is that, just because his wife can handle it, she shouldn't have to. Even if he is truly clueless when it comes to childcare, it's an easily-acquirable skill, and it's one he should be striving to learn. And even if Gallacher were somehow totally fine with the being the sole caregiver of two young childcare? It doesn't seem like much of a stretch to assume that should would be much happier if she had a spouse willing to do his share.