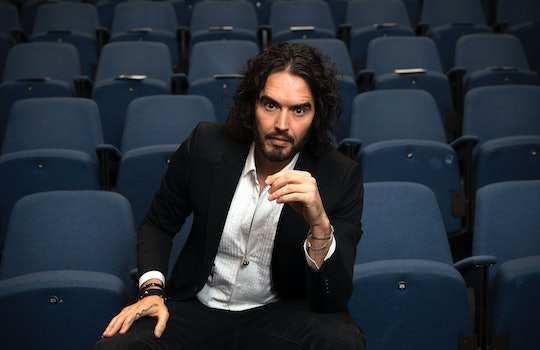 Comedian Russell Brand rarely shies away from sharing his personal opinions, regardless of how they might be perceived. As for his latest controversial statement? Russell Brand thinks tickling children should be banned, a sentiment he elaborated on in an interview with the Daily Star.

Brand and his wife, Laura Gallacher, share two daughters — 2-year-old Mabel and a newborn daughter born in July 2018. He was thrilled to become a dad, telling the Evening Standard in October 2016: "I feel lit up by the idea. I'm very excited about becoming a dad and I'm preparing myself. I am just getting ready to be with a new little person and see what it is they want."

Since his entrance into fatherhood, Brand has issued some controversial statements about parenting. Want some proof? Look no further than the time Brand incited backlash after revealing Gallacher does most of the parenting in their relationship. “When I looked after Mabel on her own, she dropped two social classes in an hour,” he joked about his ineptitude, according to The Independent.

"Russell Brand pitching himself as some New Age, all new, mature and sensitive dad - and then saying he’s too sensitive to do any actual parenting is the most Russell Brand thing I’ve ever read in my life," one person tweeted about his comments.

Brand seemingly wasn't bothered by the controversy because he's back to sharing his unfiltered thoughts. This time, however, he's addressing the topic of tickling children.

“It is an attempt to subvert the child’s bodily autonomy, to take away their right to their own space and peace," he said about tickling to the Daily Star. “Would you do it to an adult? Would you insert your rigid fingers into their belly or their armpits? Of course not.”

Brand brings up an important point here — tickling a child often ignores consent. Although tickling might seem like a playful and innocent act (it can also be these things, of course) it's not always a positive experience, especially if the person who is being tickled didn't agree to it. And too often people don't ask for consent before tickling a child, which can be problematic. Everyone — including kids — deserves the opportunity to dictate when and how their body is touched.

Brand also has regrets about tickling his friend's son, Ezra.

“To recall doing this to Ez fills me with dreadful shame and makes me want to punch myself in the face," he recalled, according to the Daily Star. "Which is what I will do to anyone who tickles either of my daughters until they are old enough to decide for themselves whether they want to be tickled or not, which by my reckoning is at 35.”

I'm not thrilled about the whole age 35 part of the comment (consent isn't exclusively an adult topic, and it can be taught early), but I agree that adults should avoid tickling children if they don't have consent.

Although everyone might not support Brand's view, I think many people can agree that this conversation is worth having. The topic of consent can never be discussed enough, right?