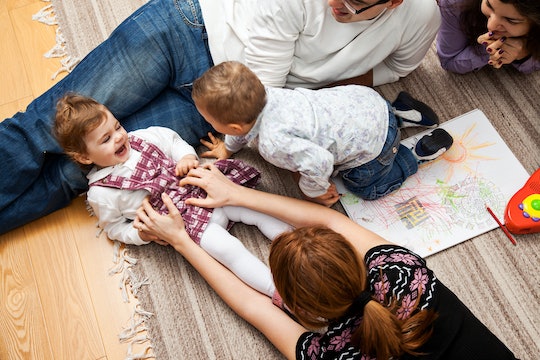 We Need To Talk About How Tickling Reinforces Rape Culture

In some sections of the Internet, this week has been one long, nonstop conversation about Aziz Ansari and consent. It’s almost as if the #MeToo movement sprouted a new branch, one that weighs heavier by the hour as we unload our thoughts on hookup culture, communication and what does and does not signify sexual assault — that conversation has focused on grown men, but it is of a piece with a separate debate about tickling and consent. A lot of the Facebook comments, op-eds, thinkpieces and tweets about #MeToo end on the same questions: the

How can we teach men? What will make them change? What can be done?

The answer to those questions are both simple and complicated and there are many excellent writers who have addressed then already. My own humble suggestion — my twig on the branch, if you’re following me on this metaphor — is not to talk exclusively about men. Let’s talk about the little boys and the little girls, too.

Tickling seems pretty benign. One of the iconic children’s toys in recent decades is Tickle Me Elmo — a doll that giggles and squirms with muppet-y glee when tickled. I’ve tickled and been tickled, you’ve tickled and been tickled, and it hasn’t been a scarring experience for most of us. (Except my brother, who hyperventilates to the point of incapacitation when he gets tickled. As a younger sister, it was my one and only weapon while play-fighting as a kid.)

There might seem a world of difference between pushy bedroom behavior of the Aziz Ansari variety and tickling a little kid. But on a fundamental level, it’s a question of respecting boundaries

In light of #MeToo, I would challenge us to look at tickling with a little more circumspection. Except in the cases (like me and my brother) when it’s meant to feel bad, we tickle others to make them giggle and laugh and to show our playfulness — it’s a sign of affection, platonic but pleasurable touch. Unlike cuddling, which often just sort of happens when you’re reading stories or sitting closely on a couch or sharing a bed, tickling is intentional about (supposedly) making the other person feel good.

Only, a lot of the time, it doesn’t. (I mean, there’s a reason the Game Of Thrones character responsible for torturing is called The Tickler.)

“I was dating a guy. He tickled me playfully, and I said, 'I know that's cute and that people do it, but I really don't like being tickled. It really makes me feel trapped and panicked. I know it's silly and funny for most people, but I really hate it, so could you please not?' He thought that it was really dumb that I had a problem with being tickled and did it anyway. … I broke up with him.”

Children don’t have the language to articulate their feelings the way Kendrick did (“‘... I told you something was important to me, and you didn't respect that.’”) But it doesn’t mean their feelings are any less valid, or that tickling is any less of an inappropriate form of touch when it is unwanted. Tickling kids is somehow seen as playfulness or silliness on the part of the adult, even when the kid is saying “stop” or “don’t.” Those are exactly the sort of words we want to empower children to use and to expect will be respected.

Parents and caregivers already have conversations about teaching children to respect physical boundaries, ranging from the basics (“no hitting”) to the unfathomably shitty chat about "telling a trusted grownup if someone touches you in a place that doesn’t feel OK." Tickling — perhaps because it seems innocent — sort of hovers outside the periphery of that conversation, when it shouldn’t.

Some leaders, like Scottish National Party politician Alison Thewliss, are acknowledging that. In November, Thewliss brought up tickling while speaking to her fellow Members of Parliament in a discussion about sexual harassment and violence in schools, saying:

“In thinking about consent, that also starts at a very young age as well — we can think about that with children too. We can do it with something as simple as tickling. If you’re tickling a child and they say stop, you stop. That’s teaching consent to very young children – they understand that, they know that.”

Consent … consent … hmm, where have we heard that word used lately?

Now, there might seem a world of difference between pushy bedroom behavior of the Aziz Ansari variety and tickling a little kid. But on a fundamental level, it’s a question of respecting boundaries — even when your intention is to make someone feel good. It’s not too much of a leap to see how a society where children’s use of the word “no” or “stop” is ignored leads to adults who think those words don’t apply to them, either.

I truly don’t mean to be a Debbie Downer here. I’m not the tickling police and I don’t think tickling should be banned. There are certainly kids (and adults) who do enjoy tickling and who should get tickled to their heart’s content.

But I do think we need to think about the messages we are sending about one’s right to say “no” to something that’s meant to feel good, but doesn’t. If we’re serious about teaching young people about affirmative consent and respecting boundaries, we need to practice that behavior ourselves.

More Like This
Stepmom Quotes & Sayings For Every Occasion
From Captions To Gifts, These Are All The Kindergarten Graduation Ideas You Need
Fun Ways To Celebrate National School Nurse Day
Say What's In Your Heart With These Stepmother's Day Quotes