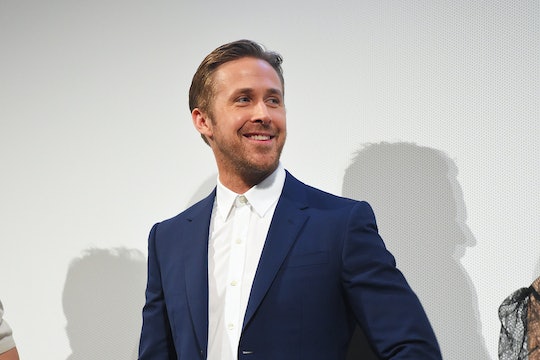 I don't know about you, but when I was growing up, I had this idea that New York City was like a modern-day magical kingdom. I thought it was where women went to find love, a career, and clothes. It was only when I actually visited the city for the first time that I realized how wrong I was. So, it seems, is the case with one specific celebrity baby. As he explained during a recent appearance on Jimmy Kimmel Live!, Ryan Gosling's 1-year-old daughter got the most authentic welcome to New York City, and the story behind it will definitely make you laugh.

Speaking on Jimmy Kimmel Live! on Tuesday, Gosling told Kimmel about how he took a family trip to the city while he was hosting Saturday Night Live for its season premiere episode on Saturday, according to People. And, of course, antics ensued.

Gosling, his partner Eva Mendes, and their daughter, 1-year-old Amada, were together in the city, and all seemed to be going well. And because it was Amada's first trip to the Big Apple, Gosling wanted to make sure she could appreciate its wonder and glory — even if she's so young. So, being the nice, caring father that he is, Gosling decided to let Amada look out the window to see the true magic of the city she was in. But, it wasn't exactly the most perfect moment to look outside.

Here's what happened when he tried to show little Amada the glorious city that never sleeps, as Gosling told Kimmel:

I brought her to the window in the morning and I said, "Sweetheart, welcome to New York." Two cars went "smash" and smoke started pouring out… these two guys got out and I won’t repeat the hand gestures for you but I quickly covered her eyes and ran away from the window.

So, yeah. Basically, Gosling's daughter learned real quick that New York City isn't all bright lights, delicious food, and thousands of opportunities. And while it certainly is all of those things and more, it's also a place where tensions run high. And sometimes, you catch a glimpse into the bad sides of everyday people.

Kimmel, for his part, thought Gosling's experience was truly fitting. "She learned to give the finger in New York," he said, "Wow. That’s a very New York experience."

And he's right — New York City is pretty intense and abrasive. Sure the clichéd images of New Yorkers yelling at each other over a taxi cab is overdone, it's a cliché for a reason. "That’s about as good as it gets," Kimmel went on to say about Amada's special welcome to the what's said to be the greatest city in the world.

Seeing a car crash and some middle fingers flying around might be a lot for a 1-year-old, but it's really just a normal day in New York City. In fact, according to the New York State Department of Motor Vehicles, there were a total of 70,475 car crashes in New York City alone in 2016. Unfortunately, it's a fairly common occurrence in the city, and little Amada simply witnessed one of them.

Hopefully, Amada and family were able to really enjoy New York City without too many expletives and middle fingers, but honestly, who knows? In New York City, anything can happen. You never know, there could be a naked cowboys, a few fake Disney characters, and Sarah Jessica Parker around the corner.

Although the sounds of cars crashing and the yelling that ensued afterwards is a pretty accurate welcome to the Big Apple, I just hope Amada doesn't get the wrong impression of New Yorkers. Because for every angry, yelling, catcalling dude, there are 10 more awesome individuals. They're what makes the city great, and hopefully she'll come back when she's older to really get a sense of New York, the permanent smell of pee and trash be damned.