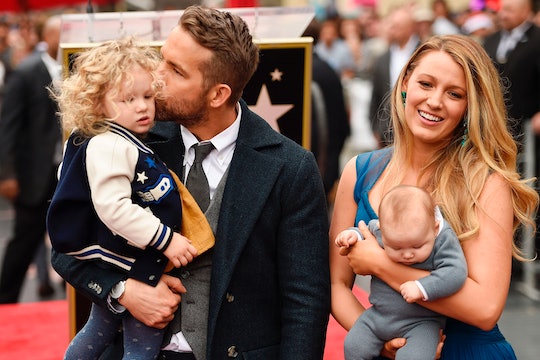 Ryan Reynolds Funniest Tweets About Being A Dad Are Dark & Hilarious

If you can't laugh about parenting honestly I have no idea how you plan to get through it. Raising kids is exhausting and emotional and difficult and wonderful. There are just too many emotions, so you might as well just laugh about them, right? This is clearly Ryan Reynolds recipe for enjoying parenthood. Ryan Reynolds funniest tweets about being a dad are exactly the remedy you need for a tough day of kid rearing. As long as you don't take him too seriously because maybe sometimes he goes a little dark.

The Deadpool actor and his wife, The Shallows actress Blake Lively, are parents to two little girls, 4-year-old daughter James and 2-year-old daughter Inez. Ever since the proud dad welcomed his first daughter James, who he named after his late father James Reynolds, he's been having a great old time on Twitter cracking dad jokes. But maybe not exactly the sort of dad jokes you're used to from your own dad. No, his are actually funny and no offense to your dad of course. Reynolds has a history of bringing that dark, edgy, Deadpool-y kind of humor to everything.

And fatherhood is no exception. Like the time he wrote that "being a father is the single greatest feeling on earth" with a notable exception. Literally all of the rest of his time without kids.

One thing Reynolds understands is the need to take a bit of a break as a parent. I suppose the only real question at hand would be defining that break. A quick drink with a friend or a relaxing walk? Or 14 years away from your kids?

As a father, the Detective Pikachu star makes it clear there's nothing he won't do for his daughters. Or, well, maybe there is one thing he won't do. Like walking through fire (to be fair, everyone says this but it does seem like a lot to ask).

I have to say, I think Ryan Reynolds might be a little tough on his daughter's talents. Keeping in mind that James is only four and Inez is only two... does he really need to judge their singing so harshly? Or is this more of a statement about Paw Patrol, a show he might have complained about in the past as per Scary Mommy?

Reynolds might not really have a leg to stand on when it comes to criticizing the Paw Patrol theme song. Check out some of his nursery rhyme ideas.

I'm just going to let this next tweet about his daughter sneezing in his mouth speak for itself. Sometimes there are simply no words.

Still, looking way back when Reynolds first became a father, a person can tell. He might joke around, but he certainly seems to love being a dad, and not just for all the raw social media material it affords him.

I know Ryan Reynolds rather macabre dad jokes aren't for everyone. But after a long day of trying to take parenting seriously, isn't it nice to just let go and laugh at the darkness?

More Like This
Ryan Reynolds Jokes His Daughters Are So “Wild,” He Thinks “They Have Rabies Sometimes”
Chris Pratt Says He "Cried" About That "Healthy Daughter" Instagram Post Controversy
Ben Affleck’s 10-Year-Old Son Samuel Test Drove A Lamborghini Right Into A BMW
Prince William Cracking Up With His Three Kids In This Candid Photo Is Too Adorable