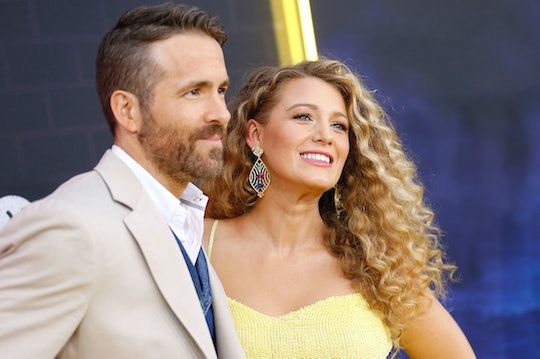 Oh, Ryan Reynolds. Listening to interviews with the successful actor and father of three is always a hoot. He practically oozes sarcasm with every question he answers. Although he and Blake Lively make it a point to keep their personal lives away from the spotlight, the father of three recently opened up about his family's newest addition for the first time. In fact, in a new interview, Ryan Reynolds cracked jokes about his newest daughter's name. Though he didn't reveal it to the world just yet, he did tease that it's full of silent letters.

News of Reynolds and Lively welcoming their third child leaked back in October, more than a month after Lively gave birth. Which is pretty run of the mill for this famous couple, who also have made it a point to not share photos of their daughters, James, 5, and Inez, 3. But on Thursday, Dec. 12, the 6 Underground actor opened up about his third child — also a daughter — during an appearance on TODAY. He joked that he is succeeding in his mission to “wipe men off the face of the earth," adding seriously, “I love it. It’s been incredible... It’s all women,” Reynolds continued, in reference to his three daughters and wife, "I'd have it no other way.” (Awww.)

When asked how he and Lively chose the name for their third daughter — which they still haven't shared publicly — Reynolds, in his signature dry humor, replied that they haven't yet. “All of the letters in her name are silent,” Reynolds joked. “I want to give her something to push against in life.”

LOL. It seems at least for the time being, the name of Baby #3 shall remain a mystery to the general public, which is perfectly their right.

Although I'm sure fans are dying to know what moniker the famous couple has bestowed their youngest daughter, this is just how Reynolds and Lively operate as parents. If you remember, there wasn't even a pregnancy announcement, per se. Lively simply showed up to the premiere of her husband's movie Detective Pikachu rocking an obvious (and fabulous) bump. And James' name wasn't revealed until March 2014, even though she was born in December 2013.

Clearly, Reynolds and Lively don't want to be the ones who shout their new baby's name from the rooftop. But I'm sure their new daughter's name will come out eventually and I'm sure it suits her perfectly.