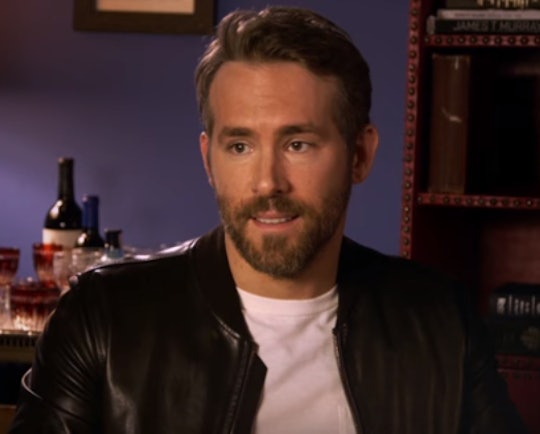 Blake Lively and Ryan Reynolds are not the people to try to spread rumors about, in case you were wondering. Both actors are masters of playing the social media game, and they're simply not going to put up with the rumor mill. Ryan Reynolds' response to Blake Lively divorce rumors was exactly as succinct, hilarious, and to the point. In other words, it was the most Ryan Reynolds thing you could imagine.

A recent report by OK! Magazine said that the couple were supposedly struggling to get some quality time together. An insider who claims to be close to the Deadpool actor and his wife told the tabloid, "The past few years, Ryan's been working out of town while Blake stays home with the kids. The distance between them has taken its toll." Lively and Reynolds share two little girls, 2-year-old James and 1-year-old Ines, and this certainly isn't the first time the couple has had to deal with divorce rumors. Maybe it's because Reynolds and his Gossip Girl wife seem to be so ridiculously happy, blessed with preternaturally good looks and talent, but they seem to have a pretty significant target on their backs when it comes to rumors. Fortunately, Reynolds knows how to deal with these rumors as quickly and hilariously as possible. He linked to the story in International Business Times India about their rumored split over not having enough time together and wrote, "I wish. I could use a little "me time."

So... yeah. I guess they seem like they're okay. The couple have been married for five years and still seem to be as happy as ever. As for not spending enough time together, Lively explained to People that the concept of the two actors leading separate lives is hogwash (my word, not hers).

My husband and I don’t work at the same time, so we all go together as a family. If we’re away as a family, it’s never more than for a day. We stay together.

Another secret to their happy marriage from a total outsider's perspective? They make each other laugh. Especially when it comes to birthday greetings; who could forget their beautifully savage exchange of Instagram birthday wishes from 2017? When Reynolds wished Lively "Happy Birthday to my amazing wife" on Instagram in August and shared a picture... of himself. Lively is mostly cropped out.

Lively's response? When it came time for Reynolds' birthday in October, she shared a picture on Instagram and wrote "Happy birthday baby." Unfortunately, it was the wrong Ryan. Ryan Gosling, to be precise.

The couple have made a second career out of roasting each other on social media, and I guess there are some people out there who might see this as disingenuous. But not me; when Blake Lively commented on a Reynolds' post that she is feeling "lonely" since Ashley Madison (the dating site that encouraged married couples to have affairs) closed down, I sort of love it. Why? Because Reynolds and Lively don't seem to take themselves too seriously.

But that doesn't mean they don't take their marriage seriously, especially since becoming parents. As Reynolds said in an interview on Late Night With David Letterman:

I'm not one for vomiting declarations of sentiment out across the airwaves, but when we had that baby, I fell more in love with my wife than I'd ever been in my entire life. I couldn't even believe it.

So let's maybe lay off the divorce rumors, shall we? I mean, they don't exactly seem to phase Reynolds or Lively. But they're just mean, guys, so cool it.