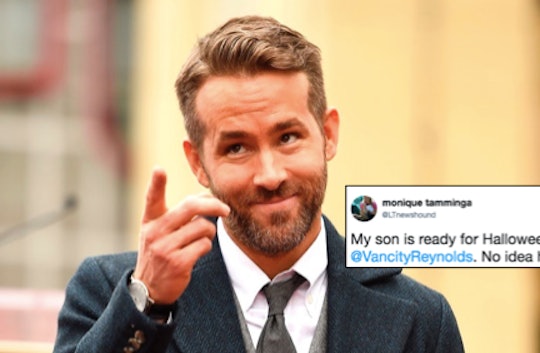 Every actor has probably struggled with trying to embody a character that doesn't feel familiar to them. A serial killer, a psychopath; someone who is so far from their nature that they really have to use the old acting chops to convince the audience to suspend their disbelief. No offense to Ryan Reynolds' acting chops, but this was clearly not the case when he played the sarcastic, sharp-witted super hero in Deadpool. Because let's face it: the two are one and the same. And this was perfectly evidenced when Reynolds roasted this mom who wanted tips for her son's Deadpool Halloween costume.

After the massive (and somewhat surprising) success of the first Deadpool movie, coupled with the upcoming release of the sequel, it's no surprise that kids want to dress up as the potty-mouthed super hero. The costume does look legitimately cool, and Reynolds' on-point performance didn't hurt matters. Because in real life, Reynolds' sharp wit and sense of comedic timing, particularly, on social media platforms, has become a character unto itself.

Witness Reynolds' spectacular take down of this poor mother who was wondering about some very important biological needs that might be complicated by her son's Deadpool costume. In short, she just wasn't sure how he would be able to go to the washroom.

This seems like a pretty reasonable concern. The costume looks pretty skintight; in fact, one wonders how exactly a person is meant to shoehorn a child into such a costume. Admittedly, her son looks pretty comfortable. But that costume would be tough to navigate in a washroom emergency.

Unfortunately for the mom, Monique Tamminga, Reynolds wasn't much help. The father of two daughters responded to this mom's plea with a tweet of his own. "Everybody knows the Deadpool suit is also a toilet. Get it together," he replied.

I mean... fair enough, I guess? Although the thought that Reynolds is using his suit as a toilet is going to ruin his sex symbol status for some ladies, including me.

This isn't the first time Reynolds has gleefully made the connection between bodily functions and his Deadpool character. To celebrate the one year anniversary of the release of the first Deadpool movie, Reynolds shared a new concept for Deadpool merchandise: toilet paper.

He captioned the photo of Deadpool toilet paper on Instagram: "One year ago today, we released Deadpool. And the gift for a one year anniversary, is of course, paper."

While the potty humor is trademark Deadpool, one has to wonder what Reynolds' own daughters might be dressing as for Halloween, and whether or not their costumes are washroom-friendly? Well, considering that Reynolds' kids — 2-year-old James and 1-year-old Ines — with wife, actress Blake Lively, are really young, perhaps he's not as concerned about this sort of issue.

And it seems as though he doesn't have much say in their costumes anyhow. Lively spoke to People recently about her daughters' Halloween costumes, and admitted that oldest daughter James is the driving force behind the decision:

My daughter suggested that our youngest should be Mike Wazowski, so I thought, ‘Great, we are all going to get to be different characters from Monsters Inc. But then she suggested the baby be Mike and that she gets to be Cinderella.

So here's the way things are going to go, kids: if you are dressing up as Deadpool this year, make sure to use the washroom before trick-or-treating. And maybe avoid drinking a lot of beverages while wearing the costume. Because your parents probably would prefer it if you didn't use the costume as a toilet, a la Ryan Reynolds. I can almost guarantee it.