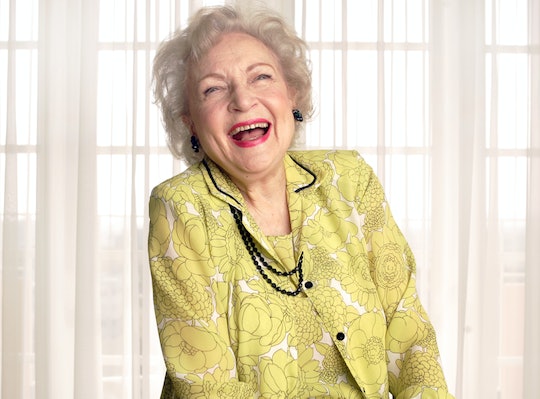 Betty White is officially 98 years old, which is truly amazing. Not many people get to live as long a life as the Golden Girls actress, nor do they get to claim such amazing friends who love them either. Friends like Ryan Reynolds and Sandra Bullock, who wished White a "Happy Birthday" on Friday with a sweet video that is a testament to their affection for their co-star from The Proposal.

The Deadpool actor and father of three daughters took to his Instagram on Friday to dedicate a beautiful message to the one and only Betty White along with his former co-star and longtime friend Sandra Bullock. The three actors all worked together on the 2009 classic romantic comedy The Proposal, when White played Reynolds' grandmother in Alaska and obviously stole the entire show, in my opinion, despite the amazing chemistry between him and Bullock.

The trio appear to have developed a pretty tight bond since then, because Reynolds and Bullock spend some time in their birthday tribute video bickering over who loves Betty White the most. Bullock says she loves her more than Reynolds, then he takes it to the next level by asking White, "What does Sandy do for you every year? Does she like, show up and hand-deliver flowers to you wearing nothing but black socks and a dozen gold bracelets, just like you requested? Doubt it.”

The video fades out to the theme song from The Golden Girls, "Thank You For Being A Friend," because that's the way all tributes to Betty White should end.

The birthday tribute proved to be pretty popular with fellow celebrities like Mariah Carey, who commented on Reynolds' video, "Awww happy birthday Betty!! (Sidebar-you know I love that movie right??)"

Certainly Bullock and Reynolds weren't the only stars who wanted to send out their birthday wishes to White either. George Takei and Billie Jean King all took to Twitter to share their blessings on her birthday, as well as former Mary Tyler Moore Show co-star Ed Asner, who wrote: "To the sweetest gal in the world. Happy birthday sweetheart! I love you."

Betty White remains one of the most beloved actors in Hollywood, as Ryan Reynolds and Sandra Bullock have proven with their sweet video tribute. Her 98th birthday was trending on Friday, with people around the world taking to the internet to share the one universal truth that binds us together: Betty White is the best of us all.

More Like This
Ryan Reynolds' Daughters Have Watched 'Elf' Thousands Of Times, Just Like The Rest Of Us
Ryan Reynolds Was Asked If He's Excited To Be A Dad Of 4 & Obviously Cracked A Joke
Ryan Reynolds Jokes He "Should Sweep Or Something" To Get Prepped For Baby #4
Kate Middleton's First Tiara Moment As The Princess Of Wales Honored Princess Diana