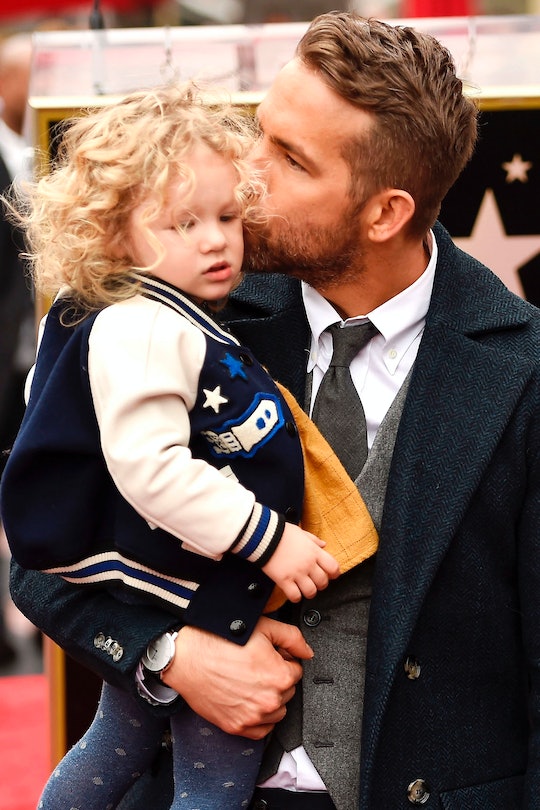 It's a Christmas tradition many families enjoy; reading a story to your kids on Christmas Eve. In my family, it's 'Twas The Night Before Christmas and always has been. Because apparently we are boring people with no imaginations at all. A lack of imagination is obviously not an issue for Ryan Reynolds. When Reynolds told his daughter a chilling story about Santa, he was seriously going off script. Because I don't remember this particular narrative popping up in any other Christmas tale I've personally heard.

In an Instagram post Reynolds posted on Christmas Day, the actor shared that he sat his daughter down in front of the fire to tell her a little tale about the big man in red... Santa Claus. Now, most of us know some version of the story of Santa Claus. He lives in the North Pole with a bunch of elves, eight reindeer, and his wife. As a group, they spend the year making toys for good little girls and boys so that Santa can deliver them by sleigh on Christmas Eve, coming down the chimney with his sack of toys on his back. The legend of Santa Claus has been around for hundreds of years and spans several countries.

That was all before Deadpool's Ryan Reynolds got a hold of him, apparently.

Reynolds shared on Instagram that he spoke to his daughter (I'm assuming it was his 3-year-old daughter James and not his 1-year-old daughter Ines, and I'm also assuming that this isn't exactly how it went) about Santa's arrival via chimney:

Daughter: Santa comes down the chimney?

Daughter: You left the fire burning all night.

Me: Yup. (Silence. Slight breeze. A crow circles in the distance.)

I mean... to each their own, I guess, right? I'm sure young James, the tow-headed daughter of Reynolds and his wife, Blake Lively (not to mention the adorable child's voice at the beginning of Taylor Swift's song "Gorgeous") was perfectly alright with the idea of Santa Claus being incinerated in her very own fireplace. And also, look closely at the fireplace for a moment; are those supposed to be Santa Claus' skinny legs standing without a body in the middle of the ashes?

Of course, I think it's probably safe to assume that Reynolds was kidding and he didn't actually tell his daughter this tale. As he often does on social media about his family (I hope, anyways).

Anyone who follows Reynolds on social media is well aware of his general, self-deprecating schtick, and responded to his Instagram post about Santa Claus *potentially* burning to death in the fireplace flue with an utter lack of surprise at Reynolds' tongue-in-cheek humor.

"YES! I’m sure Santa wore his special fire proof suit that he used to wear when my kids were little too!" one of his followers commented on the post.

Another wrote, "I can't stop laughing!"

Reynolds isn't the only parent in the household with a wicked sense of humor; his wife, Gossip Girl's Blake Lively, posted a picture of some Christmas cookies Reynolds supposedly baked on Twitter:

Lively was nice enough to share a picture of Reynolds' baking effort on Friday, and it needs to be said that Lively is reportedly one hell of a baker (as evidenced by her plentiful scrumptious food posts on Instagram). But let's face facts; Reynolds might be a talented actor, a loving husband, and an all-around pretty hilarious guy, but he's no baker.

And perhaps he might want to rethink his holiday narrative for his daughter as well. Sure, it's great to be original. And going dark is certainly a favorite when it comes to Hollywood movie story arcs. But do you really want your daughter telling her friends that Santa was burned to death in her chimney?