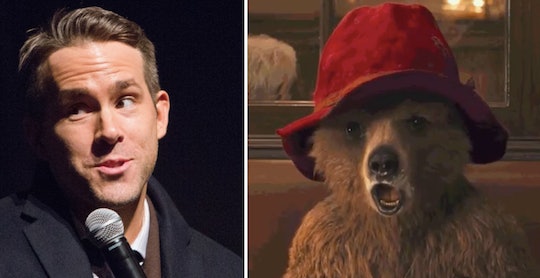 When it comes to Twitter feuds, everyone has their favorites. Amanda Bynes vs. Rihanna. Chloe Grace Moretz vs. Kim Kardashian (with a little Bette Midler thrown in). Donald Trump vs. ...well, everyone. But the star of Deadpool against your favorite stuffed bear? Yup, Mr. Blake Lively himself has thrown shade at my kids' most beloved childhood character, and Ryan Reynolds' Twitter feud with Paddington Bear will leave you absolutely shook.

The drama all started when Reynolds, whose sequel to 2016's Deadpool, Deadpool 2, was nominated this week in the Best Movie and Best Action Movie categories at the 2018 E! People’s Choice Awards, which will air on Nov. 11, the first time it's being broadcast on the cable network, according to E! News. (Reynolds himself is nominated for Best Male Movie Star and Best Action Movie Star.)

Meanwhile, Paddington 2 — the sequel to the 2015 smash based on the Michael Bond book, which made over $200 million at the box office, according to The Guardian — is up for the Best Family Film statuette at the People's Choice Awards. That's where Reynolds decided to have a little fun on social media with the cuddly mammal with the British accent.

"So honored by all the @peopleschoice noms," Reynolds tweeted on Sept. 5. "... Feel free to write us in for best Family Film. Because watch your f*cking back, Paddington."

Of course, not a lot of people were willing to take this slam lying down, with responses pouring in from Paddington Bear's own personal team and such stars of the franchise as Hugh Bonneville, who plays the bear's human adoptive dad, Henry Brown:

Other people thought Reynolds should look out for competition from other Ursine actors...

Most people had a grudging respect for both sides...

Now, this isn't the first time Reynolds has been a little sassy on social media, all in good fun, of course. He's often made fun of his own wife, actress Blake Lively, for example, on Instagram, cropping half her face out of a supposed birthday tribute (don't worry, she retaliating by posting a pic of Ryan Gosling).

He's made numerous jokes about parenting, including kidding about dropping his daughter off at Burning Man, according to Marie Claire, and brought other celebrities into his punchlines, from wishing Billy Ray Cyrus happy birthday instead of Blake Lively, as the magazine also detailed. He's even compared hair colors with fellow Canadian Ryan Gosling on Twitter in a faux attempt to tell the two actors apart. Recently, in helping launch a new gin brand, Reynolds joked on Twitter that he and Lively, parents to two daughters, 3-year-old James and almost 2-year-old Inez, managed to stay up to party, at least for a bit:

The actor has also taken on relatives, including this shout-out to his brother in 2017: "Jeff, if there was a fire and I had to choose a family member to save, obviously it’d be me. But if I had time to save one more, you can be damn sure I’d call the fire department...."

In 2015, he roasted his own mom: "So cute. Asked my mom out to lunch and she yelled, 'Squad-Goals!' I laughed pretty hard before never ever seeing her again."

Even as Reynolds and Lively have proven to be one of the funniest couples on social media, with their back-and-forth banter, you never get the sense that the joke is going too far or that they're trying too hard. They don't appear to post images of their kids online — posing for a rare family pic at his recent star ceremony for the Hollywood Walk of Fame — so it just feels like this couple is being silly and real instead of trying to grab even more media attention.

As long as Reynolds can keep himself in check, maybe Paddington should feel honored to be chosen as a target of his considerable wit? I, for one, will be looking forward to any future face-offs between the famous actor and our fave furry friend...