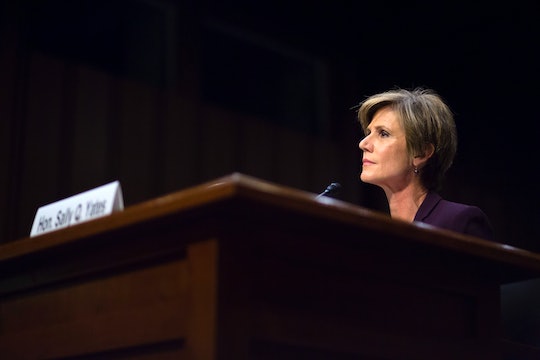 In 100 years, history books (if books still exist) will no doubt have very thick chapters on the early days of the Trump administration, and its many controversies and scandals, with countless important names to remember. One of those names will be Sally Yates, who served as Acting Attorney General for just 10 days before being fired for refusing to defend Trump's travel ban, which many referred to a "Muslim ban." Speaking at Harvard Law School on Wednesday, Sally Yates explained why she defied Trump during a "moment when the law and conscience intersected," according to The Washington Post.

Yates took on her role after former Attorney General Loretta Lynch stepped down, and the plan was for her to maintain the status quo in the Department of Justice until current Attorney General Jeff Sessions was confirmed. There were to be no big changes in policy. That plan was dashed when Trump signed his Executive Order banning travel from seven Muslim-majority countries just a week after taking office for three months. Though Trump told reporters it was "not a Muslim ban" just after signing it, that assertion contradicted his previous statements calling for "a total and complete shutdown of Muslims entering the United States," as stated on his campaign website. Trump's policy was just recently scrubbed from the site, but the internet still remembers, and so does Yates. The White House did not immediately respond to Romper's request for comment.

Defending the ban "would require the Department of Justice to argue that the Executive Order had nothing to do with religion," Yates told Harvard Law students, "despite the numerous prior statements that had been made by the president and his surrogates regarding his intent to effectuate a Muslim ban," according to the Post. Yates interpreted that as "a defense not grounded in truth" that she could not stand by. Though some questioned her decision to refuse to comply with Trump rather than resign, she explained that "resigning would have protected my personal integrity, but it would not have protected the integrity of the Department of Justice."

Since signing the order, Trump has repeatedly denied that it was intended as a Muslim ban, arguing that "There are over 40 different countries worldwide that are majority Muslim that are not affected by this order," according to the Post. That's true; countries such as Saudi Arabia and the United Arab Emirates (with which Trump still does business while holding office) aren't included in the ban, despite being the countries where the perpetrators of the Sept. 11 attackers originated, according to CNN. Since Sept. 11, the majority of U.S. terror attacks have been committed by American citizens or legal residents, while no fatal attacks have been committed by persons from countries affected by the ban, according to Politifact.

"The arc of the moral universe does indeed bend toward justice," Yates told the audience of law students on Wednesday, per the Post, "but it doesn’t bend there on its own. And so I would urge you to grab hold of that arc and not let go, because the people of our country, and indeed the entire world, are counting on you."