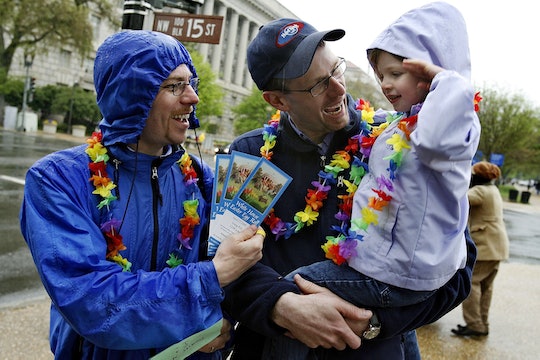 Kids Raised By Same-Sex Parents Are Excelling In School, According To New Research

Now here's a study some of those ultra conservatives can really sink their teeth into. It looks as though same-sex parents might have a leg up on their heterosexual counterparts. According to a new study from European economists, as The Washington Post reported this week, children raised by same-sex couples are doing better in school, and when you really think about it this makes total sense.

European economists Deni Mazrekaj, Kristof de Witte, and Sofie Cabus of Belgian university KU Leuven recently took a comprehensive look at all children born in the Netherlands after 1998 up until 2005 using government data to track school performance. To do this, researchers looked at standardized testing taken after primary school, around age 12.

They were looking specifically at what sort of long-term effects being raised by same-sex parents might have on a child, and considering the Netherlands was the first country to legalize same-sex marriage back in 2001, it was a logical place to start.

According to the study, researchers looked at all children born in the Netherlands after 1998, not simply those born to same-sex couples, and they drew some interesting conclusions. Chief among those interesting conclusions? It seems children raised by same-sex parents had a slight edge when it came to their performance in school on the whole. Researchers noted that these children tended to score about 6.7 percent higher than other children, and they even postulated as to why this might be.

The economists, who presented their research at the American Economic Association conference in January, found a direct link between the socio-economic background of these same-sex parents and the success rate of their child's test scores. They noted that same-sex parents tend to be in a better financial position, perhaps because the time and expense that goes into having a child (IVF treatments, adoption) is clearly a powerful motivator.

According to Pink News, the researchers explained: "Our results mostly support the selection approach stating that given the time-consuming and costly procedures for same-sex couples to obtain children, same-sex parents typically have a high socioeconomic status resulting in higher parental investment."

Researchers also found that children of same-sex parents were more likely to graduate from high school, according to The Washington Post, although the authors of the study admitted that extraneous circumstances could absolutely skew results.

"Many children come into a same-sex family through divorce of a homosexual parent with a heterosexual partner and therefore did not grow up in a same-sex family. Divorce may exert an independent negative effect on school outcomes," the authors explained in their paper, according to The Washington Post.

This research, which looked at over 1 million children of different sex couples and 1,200 children of same-sex couples, appears to gel with previous research in the area. Research like this 2017 study from the United Kingdom published in The Guardian that found children from same-sex parents were doing just as well as their peers.

In fact, this study appears to point to socio-economic struggles as a cause for concern, rather than a parent's sexual orientation. Perhaps we could focus some attention on poverty affecting kids in school now that we realize their parents' sexual orientation isn't hurting them, yes?

More Like This
New Study Finds Moms Who Earn More Than Their Husbands Also Do More Housework
Dwyane Wade Shares Beautiful Advice For Parents Raising Transgender Children
These Darling Baby Boy Names All Start With The Letter "D"
When Is National Brother's Day?