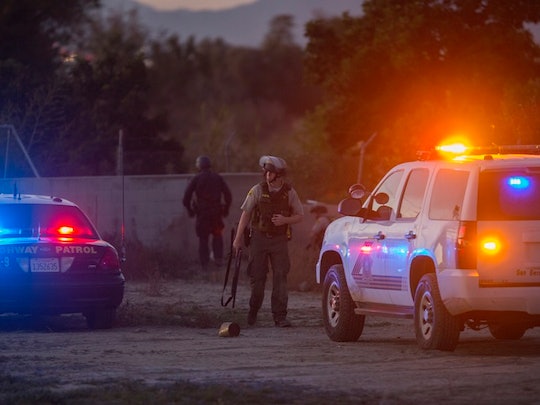 The suspects in the mass shooting at the Inland Regional Center in San Bernardino, California have been identified as a married couple, Syed Rizwan Farook and Tashfeen Malik. But as of yet, no motive has been found. Farook was known to many of the victims; he was an environmental health specialist with the San Bernardino County health department and was in attendance at a company Christmas party earlier that day. Officials have indicated yesterday's shooting doesn't seem like it was a spur-or-the-moment decision; the pair wore tactical gear and carried assault rifles. Said Bernardino Police Chief Jarrod Burguan to reporters:

There had to be some degree of planning. These people came prepared to do what they did as if they were on a mission. They were armed with long guns, not with handguns.

An explosive device was also found at the scene.

During a press conference at the Council on American-Islamic Relations Wednesday night, Farook’s brother-in-law, Farhan Khan, was at a loss for an explanation. "I am in shock that something like this could happen," he said. "Why would he do something like this?” Reporters repeatedly pressed him to speculate on a possible motive, but Khan did not provide details or speculation on what might have happened.

Khan told NBC News that Farook and Malik left their 6-month-old daughter in the care of Farook’s mother on Wednesday, telling her that they had a doctor's appointment. According to the Washington Post, Farook’s mother tried calling the couple when she heard of the shootings, and was concerned that they might be among the victims when they didn’t answer. Around 2 p.m., she found out that her son was a suspect.

Little is known about the couple thus far. Farook is first-generation American, born in Illinois to Pakistani immigrants. Malik was born in Pakistan and lived in Saudi Arabia. The couple met online, and Farook traveled to Saudi Arabia two years ago. When he returned to the U.S., friends say he was married.

NBC has discovered an online dating profile they believe belonged to Farook on IMilap.com. Khan did confirm that the profile picture was Farook’s, and many details appear to line up. The profile for user "farooksyed49" reads:

According to the L.A. Times, Farook’s coworkers described him as quiet, polite, and well-liked. “He never struck me as a fanatic, he never struck me as suspicious,” said Griselda Reisinger. He was known to be a devout Muslim, but didn’t discuss it at work. The only digital footprint Malik left is a sparse Target baby registry, citing a due date of May 17, 2015 in Riverside, CA, which corresponds with the little we know.

We may, indeed, learn of the couple’s motive in the coming days and weeks, but I doubt that it will be much comfort to the victims and their families. Whether this was a work dispute that spiraled out of control, a religious extremist attack, or something else entirely, there are still upwards of 14 people dead and at least 21 people wounded, countless terrorized citizens, and a little girl whose parents will never pick her up from her grandma’s house. There can be no justifiable reason for any of that.

We don't know why Farook and Malik left their daughter behind, or what motivated them to allegedly lead a shooting at the Inland Regional Center. But I think we can all agree that it's good news that she's safe.