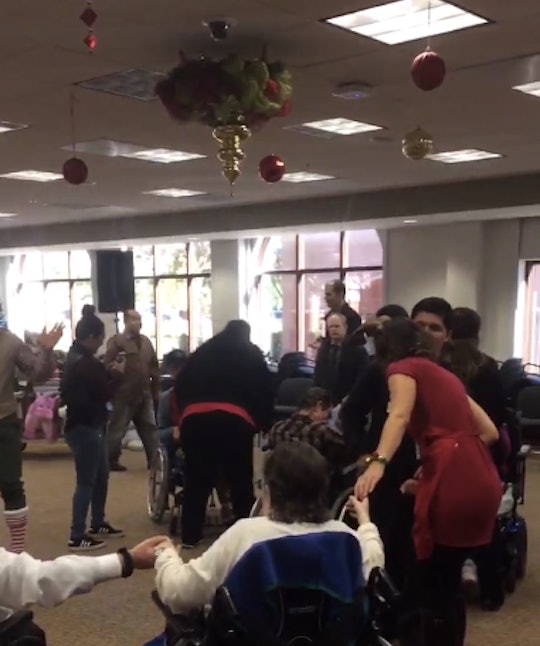 Earlier: The gun violence continues. Just five days after three people were killed at a Colorado Springs Planned Parenthood facility and two months after a gunman killed nine people at Umpqua Community College in Oregon, at least three active shooters are on the loose in San Bernardino, California after emptying rounds at the Inland Regional Center. Though it's unclear just how many people are injured at this time — reports say upwards of 14 people were killed while upwards of 17 people were injured — what is clear is just how heinous a crime this was. Particularly considering the Inland Regional Center aims to help people with developmental disabilities. People who, just one day before, were celebrating the holidays. And seeing video of the Inland Regional Center's holiday party, filmed just 24 hours before the tragedy occurred, is deeply upsetting.

Video from the event made its way onto social media shortly after the shooting occurred, painting an image that's starkly in contrast with the events of Wednesday, when up to three gunman, including one female shooter, opened fire in the facility before speeding off in a black SUV. Two of the shooters have since been caught by the authorities. It's troubling to imagine that anyone would inflict such violence on a scene like this.

To donate to the Inland Regional Center and show your support, click here. (The site, however, is currently down.)