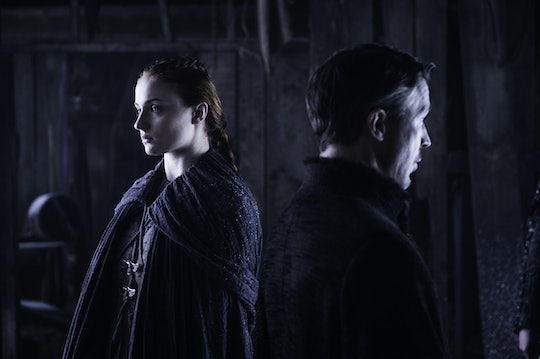 In every season of Game of Thrones so far, Littlefinger has managed to prevail, thanks to some sort of scheming on his part. For the first time, though, in Sunday's episode of Game of Thrones, Sansa's speech to Littlefinger left him — in a word — absolutely speechless. Remember when he was all slick with his words and too confident for his own good, pretty much always? Yeah, Sansa Stark would be the only one to finally put him in his place. And rightfully so.

Of all the people in Westeros whose lives Littlefinger has touched (and ultimately ruineD), Sansa Stark has easily been a fan favorite to see the comeback of. It is because of Petyr Baelish that Sansa was stuck married to Ramsay Bolton, the bastard boy who took over her home of Winterfell and pretty much tortured her on the regular. True, Baelish was also responsible for getting Sansa out of King's Landing, but trading one hell for another doesn't necessarily make him redeemable. Who knows — Sansa could've been living it up with Tyrion in Meereen right now if Baelish hadn't whisked her away.

But the most important piece of Sansa's speech to Littlefinger is that it was from her and it called him out on every damn thing he'd done to her. Hearing the once meek Stark girl call Petyr Baelish out, while being pretty much the strongest queen we could ever hope for made the guy speechless. Littlefinger, who seems to be able to talk himself out of and into pretty much anything was speechless while Sansa Stark called him out for being responsible for her rape at the hands of one of the craziest dudes in Westeros.

While it's been almost expected of Sansa to grow stronger since she left Winterfell, which had become her prison rather than home, seeing her stand up to Littlefinger sort of drove that home for her character. It enables viewers to see that Sansa Stark is capable of so much more now, despite and because of all that she's been through. It also shows it's possible to render Littlefinger speechless. So, he isn't above being gotten, despite the cunning actions he's shown thus far in Game of Thrones.

Judging by Sansa's speech to Littlefinger, she's not only capable of playing the game, but capable of surviving and coming out on top. Plus, it makes you wonder how Sansa is going to try and get back at the others who've hurt her, a la Arya Stark. OK, maybe not that intensely, but she's no longer the little girl pining for Joffrey Baratheon, and now Littlefinger knows it. Soon, the rest of Westeros will too.