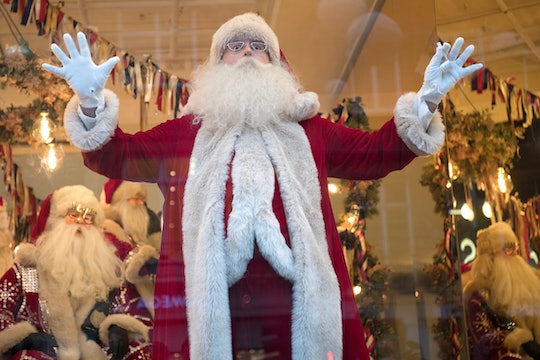 Santa Is The Plot Of A Horror Story, & I Will Not Be Censored

He watches while you sleep. He keeps track of your every mistake. He can get into your house even when you lock all the doors, and will eat all your food. He attains a white beard without a hint of brassiness — a feat that he can only have been achieved by selling his very soul. Who is he? He is Santa, hero of the holiday season, a figure who looms large in your children's lives. Someone you've never even questioned. Someone who could torture everyone you love. Someone...evil. The world cloaks this truth in bedazzled sweaters and blinking Christmas tree-light necklaces, but I will come on out and say it: Santa is a nightmare. Why cannot we admit this??

He torments your little ones all year long, deceiving you into letting him into your children's lives with the promises of gifts and good behavior. It starts with the threats. "If you do that, Santa might not come to our house this year..." "Do you want coal in your stocking?" "You don't want to end up on the naughty list, do you?" He is the dark decider, laying down the law on which children are worthy of presents. You fill your house with his disciples, giving him even more power. He becomes an omniscient force; you watch your kids helplessly write letters to him, begging to fulfill their wildest dreams. They tremble at the thought of him, ceasing all youthful mischief out of fear. He makes you believe he is your salvation, although he is truly your downfall.

There's a reason your children scream when you drag them to the mall for those annual holiday photos on Santa's lap. Their tiny brains sense the evil emanating from that omniscient, cookie-filled demon. They see past his jolly laugh and rosy cheeks to the monster within, but you send them right into the belly of the beast, shoving your own flesh and blood onto the lap of the enemy even as they beg to be released. You force them into his inner circle, and then expect them to tell this man their deepest secrets. The unnaturally red nose stares at you as he welcomes your child onto his lap, and he feeds on their wishes, growing stronger and wider with each confession.

Each child prays their wish list will be granted, but it's up to the man in the haunting red suit to decide. His beard is said to twitch of its own accord, which only further proves dark magic is at play. He sends your child off, making no promise to fulfill their dreams, only taunting them with his inner knowledge of their desires. His heartless ways know no bounds.

His true power comes on Christmas Eve, when he becomes a shadow lurking in the very fabric of your home. You adjust the stockings in a panic, and your children frantically lay out the feast the red devil requires upon his visit. You read his story together, believing it to be out of tradition, but the real root is fear. You read each word of The Night Before Christmas like a prayer, fear of what would happen if you didn't driving you to finish the story. What would that monster do if his cookies weren't there or if his story had not been read? Imagine the carnage.

The heavy steps of Santa himself follow, and then comes the agonizing silence as he takes over your home for however long he feels like it.

The children check the offerings for the monster once more before they retire to their bedrooms, knowing they will not sleep one wink. The intruder's arrival is now imminent, and you are powerless to stop it. Even if you wanted to prevent him from entering your home, there's no hope. He can come in through the chimney, or create an entry of his own accord if there's no fireplace according to lore (aka The Santa Clause). He will come inside if he so desires; any effort to keep him out will be futile.

Soon, you'll hear the tell-tale sound of hoof beats on the rooftop, and your children will flinch in their beds. You had forgotten the demon's control over animals until this moment. You stay where you are, unable to stop the uninvited visitors from entering your house. The heavy steps of Santa himself follow, and then comes the agonizing silence as he takes over your home for however long he feels like it. Maybe you'll hear grumblings as he inspects the offerings that have been left for him, or maybe he won't make one sound as he leaves his rewards (or punishments). Either way, your kids will be tensed in their beds, waiting helplessly for some sign that they have been good enough to not end up on the bad list this year. The desire to catch a glimpse of him almost pushes you to go look for him by the Christmas tree, but the fear becomes too much. It is better not to know.

Eventually, he leaves. Maybe he'll scream, "Merry Christmas to all and to all a goodnight" as he goes, mocking you with his power. Maybe he'll leave as silently as he came, and the quiet will haunt you most of all. Release comes on Christmas morning. The children luxuriate in their gifts, and you relax, feeling safe for the first time in weeks as you think of packing the Elf on the Shelf back into its box. You smile.

But suddenly, you realize with dread that the magic of Christmas isn't magic after all; it's the sweet relief of knowing for one day, there is respite from that cruel horror. But soon, the countdown begins again. Only 365 days until he's back.

More Like This
Scott Calvin Is Ready To Retire In The Santa Clauses Series Coming To Disney+
Searching For Home As A Lifelong Renter
Home Reno Culture Makes Me Feel Like I Live In A "Before" House
I’m Getting Dual Citizenship For My Jewish Children, Just In Case.